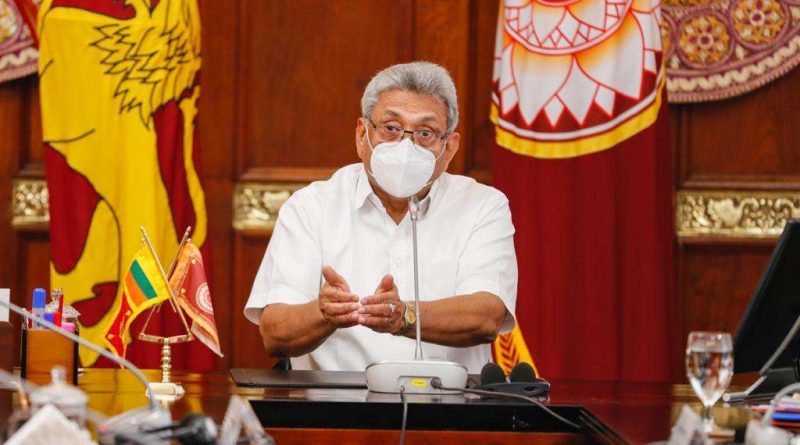 President Gotabaya Rajapaksa has said the production and supply of the pharmaceutical items should be streamlined for the benefit of the people disregarding the interests of handful of intermediaries. President Rajapaksa said this while reviewing the production, import and distribution of pharmaceutical supplies during a discussion with the Chairmen of the two State Pharmaceutical Corporations held at the Presidential Secretariat today. The President said formulating a simple import and supply mechanism of medicines is a priority. All the medicines should be of highest standards said the President while warning relevant officials not to give any chance to produce or import substandard medicines. While stressing the need for maintaining buffer stocks to prevent any scarcity to occur, the President pointed out that orders should be placed by calculating the date of expiry of medicines. Chairman of State Pharmaceuticals Manufacturing Corporation Dr. Uthpala Indrawansha said that his organization produces 80 medicines required by hospitals in the country. “Plans are underway to domestically produce Saline and several other items. This will save the country around Rs. 1,300 million annually,” Dr. Indrawansha said. The possibility of investing money belonging to the Employees Trust Fund and the Samurdhi Movement in the production of medicine was also explored, the President’s Media Division said. “If such a mechanism could be put in place, these two Funds will have a permanent source of income,” President said. Replying to a query by the President as to how the medicines supply in the country is structured, Chairman of State Pharmaceutical Corporation Consultant neurosurgeon Prasanna Gunasena said the supply is done in three ways. They are production by the State sector, production by the private sector and imports by both sectors. Currently there are 750 varieties of medicines in use in the country and sometimes a scarcity could occur due to delays in procurement process in respect of imports, the Chairman said. Directing that no room should be left for shortages in the supply of medicines in the country, the President pointed out the necessity of deciding the medicinal requirement of the coming year by studying the demand pattern of the previous year. Secretary to the President P. B. Jayasundera, Secretary to the Ministry of Health and Indigenous Medical Services Major General Sanjeewa Munasinghe and representatives of the Treasury were also present during the discussion.