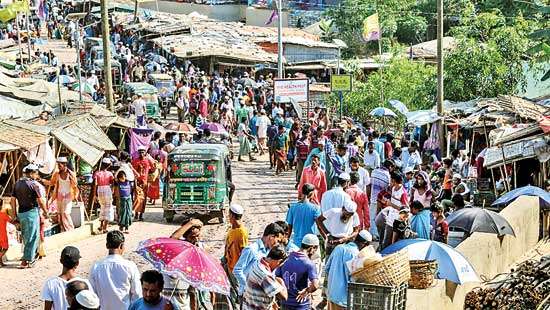 Emergency teams raced Friday to prevent a coronavirus “nightmare” in the world’s largest refugee settlement after the first confirmed cases in a sprawling city of shacks housing nearly a million Rohingya.

There have long been warnings the virus could race like wildfire through the cramped, sometimes sewage-soaked alleys of the network of 34 camps in southeast Bangladesh.

Most of the refugees have been there since around 750,000 of the Muslim minority fled a 2017 military offensive in neighbouring Myanmar for which its government faces genocide charges at the UN’s top court.

But the World Health Organisation (WHO) later said one case was a Rohingya man, and the other was a local man who lived nearby.

Mahbubur Rahman, the chief health official in the local Cox’s Bazar district, said news of the infections had sparked “panic” in the camps.

The 35-year-old Rohingya man, who lives in Kutupalong — the largest of the camps — also sparked a manhunt at one point after he fled before police found him around four hours later.

“We are worried. He can spread the disease in the camps,” community leader Abdur Rahim told AFP.
Rahim said the man is believed to have been infected in a hospital in a nearby town where he took his injured brother for treatment.

WHO spokesman Catalin Bercaru told AFP that “rapid investigation teams” were being deployed.