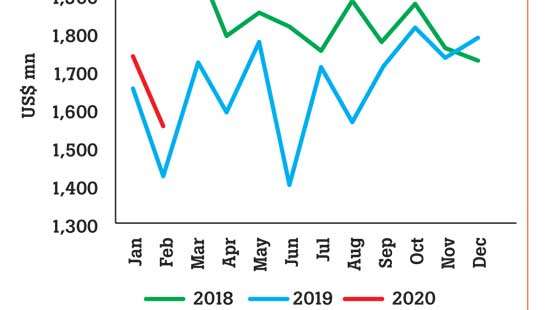 Sri Lanka’s trade deficit in the month of February widened by US$ 574 million as exports languished and imports rose, latest data released by the Central Bank showed.

The earnings from merchandise exports edged up by mere 0.7 percent year-on-year (YoY) to US$ 988 million in February while imports rose 9.1 percent YoY to US$ 1, 562 million.

Sri Lanka’s export income is set to take beating from March as lockdowns imposed during the latter part of that month to control the spreading of COVID-19 virus hampered factory production.

Disruptions to global supply chains due to the rapid spreading of the virus world over will also add to Sri Lanka’s export woes.

The marginal growth in exports in February was led by the increase in industrial exports though agricultural and mineral exports declined in comparison to February 2019.

Expenditure on merchandise imports increased notably, on YoY basis, in February 2020 for the third consecutive month, though recorded a decline on month-on-month basis.

Imports were driven by higher consumer and intermediate goods imports partly due to the lower base recorded in February 2019.

Importation of textile and textile articles in the month also fell 14.2 percent YoY to US$ 182 million.

With government imposing restrictions on non-essential imports following the COVID-19 outbreak in a bid to defend the rupee against the US dollar, the expenditure on imports is expected to decline from March onwards.
Personal vehicle imports and the oil bill are expected to witness significant declines.

On a cumulative basis, worker remittances grew by 6.0 percent to US$ 1,108 million during the first two months of 2020 in comparison to the corresponding period of 2019.

“Worker remittances are also likely to be affected by the COVID-19 outbreak in the forthcoming months, with key sources of remittances such as Italy, South Korea and the Middle East being affected by the pandemic and the resultant economic slowdown,” the Central Bank said.