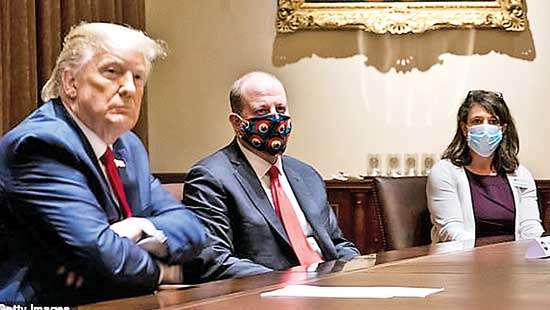 President Trump said he wanted American schools to be reopened because ‘our country isn’t reopened if they’re closed.’

He told reporters in a meeting with governors Wednesday that the coronavirus has ‘very little impact on young people.’

And he lashed out at Dr. Anthony Fauci twice on Wednesday, telling reporters in the Cabinet Room that ‘he wants to play all sides of the equation.’

In an interview with Fox Business Network’s Maria Bartiromo earlier in the day, Trump said, ‘I totally disagree with him on schools,’ after Fauci preached caution during Tuesday’s Senate hearing on the coronavirus response.
He told the Fox Business anchor that Fauci was a ‘good person’ but someone he’s ‘disagreed’ with.

He told reporters at the White House that he was ‘surprised’ when Fauci expressed concerns about opening businesses and schools prematurely.

‘I was surprised by his answer, actually, because, you know, it’s just to me it’s not an acceptable answer especially when it comes to schools,’ the president said when asked what he meant about Fauci trying to play ‘all sides.’ ‘The only thing that would be acceptable as I said is professors, teachers, etc., over a certain age, I think they ought to take it easy for another few weeks.’

Fauci never said that schools shouldn’t be reopened.
He did say that decision-makers needed to observe the status of the virus in their area before the first day of school in the fall.

‘We just have to see, on a step-by-step basis, as we get into the period of time with the fall, about reopening the schools exactly where we’ll be and the dynamics of the outbreak,’ Fauci testified before the SENATE Help Committee.

During a back-and-forth with Sen. Rand Paul, a Kentucky Republican, Fauci said that institutions should be cautious because ‘we don’t know everything about this virus.’

‘And we really better be careful, particularly when it comes to children,’ said the head of the National Institute of Allergy and Infectious Diseases. ‘I think we better be careful if we are not cavalier in thinking that children are completely immune to the deleterious effects,’ Fauci added.

He pointed to the fact that children ‘presenting with COVID-19’ were experiencing a ‘strange inflammatory syndrome,’ which Fauci noted was similar to Kawasaki disease, where patients’ blood vessels become inflamed.
On Tuesday, New York City Mayor Bill de Blasio reported that a total of 52 New York City children had been diagnosed with the syndrome, with another 10 cases pending. One child had died.

Fauci was responding to Paul who had griped that he didn’t believe the doctor should be the ‘end all’ in coronavirus advice.