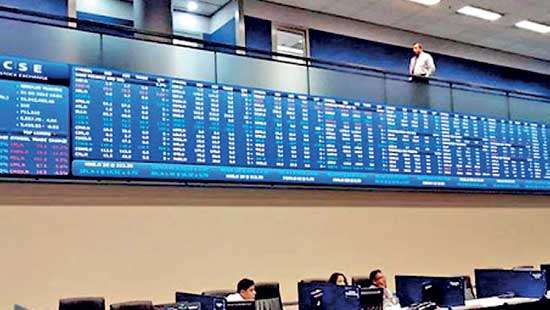 By Nishel Fernando
The Colombo Stock Exchange (CSE) is scheduled to resume trading today as the market braces for heavy foreign selling despite anticipated weak buying interest amidst the impact of COVID-19, further exacerbated by its longest ever shutdown spanning for seven weeks along with the island-wide curfew to slow the spread of the pandemic.
The CSE last Saturday confirmed that it would resume trading from today onwards in view of the decision made by the government that both public and private sector entities in Western Province and Puttalam district should re-commence work from today onwards.

Accordingly, the pre-open session is scheduled from 10.30 a.m., followed by the open auction at 11 a.m. and regular trading up until 1 p.m.

With nearly all markets barring Sri Lanka and Bangladesh remaining open despite the current pandemic situation, the market analysts pointed out that the market closure had severely impacted foreign investor sentiment on Sri Lankan stocks while potentially missing a global rebound seen in April.

“Sri Lanka and Bangladesh are the only markets that were closed in the region; hence, this would affect the confidence of foreign investors leading to selling pressure. There has been lot of selling pressure and panic generated in the market with the closure of CSE.

“In terms of recovery at a time where they are looking to come back, we will be pushed to the bottom of the list,” First Capital Head of Research Dimantha Mathew told Mirror Business.

First Capital forecast a 15-20 percent dip in the All Share Price Index (ASPI) of the CSE in the short term on foreign selling and lower earning to 3,750 index points.

The Dhaka Stock Exchange (DSE) and the Chittagong Stock Exchange in Bangladesh are also expected to re-commence trading this week onwards, according to media reports.

Candor Equities Limited, Director and Colombo Stock Brokers Association Past President Ravi Abeysuriya also predicted a 10-15 percent drop initially while noting that the market closure has been the most damaging to investor sentiment.

“We and Bangladesh are the only two markets in the world that were closed while all others remain opened.
The market has to facilitate liquidity and price recovery whether it goes up or down or whatever the calamity is, that’s the purpose of a market. The closure of a market is most damaging and most hurtful for investor sentiment,” he said.

Mathew noted that low volumes of trade would likely to continue until the market stabilises despite the high interest among foreign investors for a sell off.

“The problem is that the selling quantity can be matched as there will be more sellers than buyers. In such a situation, there will be less buying in the market and until the market stabilises, the buyers are unlikely to come to purchase the offered quantities,” he added.

Despite anticipated downward pressure, Mathew noted that trading activities remain extremely difficult to predict, although it would be on low volumes.

“It is difficult to predict. The thousand points could be lost within two days. During last two days of trade before the curfew, the ASPI came down by roughly 350 points each day. So it won’t be very surprising for the market to come down 500 points in a day. Everybody knows that market will fall, so they will wait for the fall,” Mathew elaborated.
Further, selling pressure from local retail investors, margin accounts are also expected in initial days in addition to foreign investors.

“When the market comes down, there will be more selling pressure as well. We think that the selling pressure will continue for couple of months. Then, the market will stabilise and move up again in stages while the foreign selling continues,” Mathew opined commenting on the recovery of the market.

Telco, food and beverages, energy, banking and some retail stocks are expected to make the fastest recovery with the anticipated recovery in earnings.

First Capital expects the market earnings to drop by 28 percent on average this year.

Further, Abeysuriya noted that investors would also consider investing in more innovative companies which are able to switch into new products during the pandemic such as firms able to swiftly move into protective gear production utilising their cash reserves.

This is partly due to the anticipated upward pressure on interest rates, which is expected to come into play from the end of this year or early next year.

“We are expecting interest rates to move up at the end of this year, that’s why we limit the anticipated recovery to 1000 points,” Mathew said.