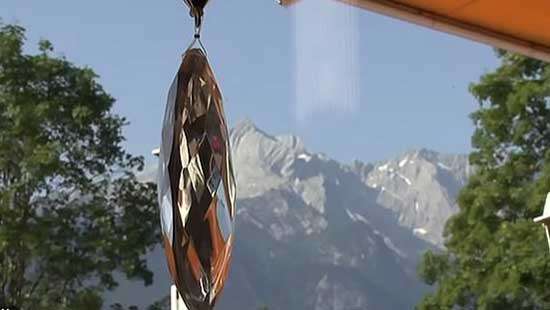 The King of Thailand is said to be spending the lockdown – accompanied by a harem of 20 concubines with military ranks in a German Alpine resort.

King Maha Vajiralongkorn, 67, is believed to be back at the four-star retreat in southern Germany after returning from brief visits back to Thailand.    A report by Bild found that Vajiralongkorn and his entourage have booked out the whole fourth floor which includes a ‘pleasure room’ and is decked out with ‘treasures and antiques’ from Thailand.

His ‘sex soldiers’ are said to be assembled as a military unit called the SAS like Britain’s special forces – with the same motto, ‘who dares wins’.

The Grand Hotel Sonnenbichl where the king is staying is in Garmisch-Partenkirchen, a ski town near the Austrian border which has seen most tourists stay away.

The hotel’s website says that it is ‘currently unavailable for bookings’ because of the coronavirus pandemic, without mentioning its long-term guests.

One hotel worker said staff are forbidden from the fourth floor where the king and his entourage have set up camp.
Max Boeddeker, a Bild reporter who investigated the hotel, said the king’s diplomatic immunity meant there was little that Germany could do about it.

The king, also known as Rama X, spends much of his time outside Thailand and has previously been spotted wearing a crop top while cycling in Switzerland.

At the hotel, his concubines are apparently given military-style designations with number such as S01 or S020 and ranks such as major or colonel.

They are also given honorary titles such as Sirivajirabhakdi or ‘The beautiful one who will be faithful to the king’, it is claimed.

The king is also said to have a so-called ‘pleasure room’, which has been set up especially for the monarch and his concubines.   Thailand expert Andrew MacGregor Marshall told Bild: ‘The whole floor is full of Thai antiques and treasures from Bangkok.

‘The concubines make a big gamble – with the hope of winning big. Some are happy to join and are hoping for riches and success for themselves and their families.  ‘Others give in to the king’s pressure to join over fear of the consequences if they refuse.’

The king’s stay in Germany means he missed Coronation Day in Thailand, marking a year since he was installed as the new monarch last year.

There is no word on how long he intends to stay in Germany, where the state of Bavaria is planning to re-open hotels later this month.