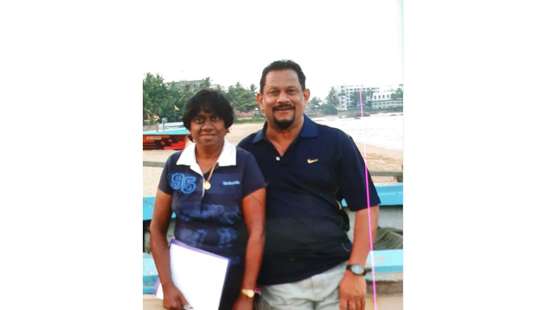 Coaches who have not even won a medal at national level or followed any international coaching courses have created a coaching mafia which, if unchecked by the national sports associations and the Sports Ministry, would produce a dark era for the future of sports in the country, warned veteran coaching couple Sunil Gunawardena and K.G. Badra Gunawardena.

This coaching mafia especially in athletics may be gaining prominence and benefiting immensely by encouraging the usage of unwanted supplements but by trying to do this they are not producing genuine stars, only ‘broiler’ sportsmen and women, the duo said.

Holder of the 100-metre national record for several years, Sunil Gunawardena was a member of the Sri Lanka men’s 4 x 400m relay team which won a gold medal at the Asian Games in Tehran in 1974. He represented Sri Lanka for over a decade at international competitions, but still remembers with horror the terror attack at the 1972 Munich Olympic Games which killed 16 Israeli athletes.

A former president of Athletics Association of Sri Lanka and former Deputy Director General (Sports) at the Ministry of Higher Education, Sunil Gunawardena was renowned for being the leading sprint coach in the country. Damayanthi Darsha, Mahesh Perera, Rohan Pradeep Kumara, Rohitha Pushpakumara and Prasanna Sampath Amarasekera are some of the international stars produced by Sunil Gunawardena.

K.G. Badra has the honour of being the first and only woman to represent Sri Lanka at the Commonwealth Games in Edinburgh in 1970. She also represented Sri Lanka at the Asian Games in 1974 and 1978 but despite qualifying for the 1972 Munich Olympics she could not participate because of ill health. Having joined the Sports Ministry as Sports Officer along with renowned athletic coaches Derwin Perera and S.M.G. Bandara in 1972, K.G. Badra later distinguished herself as an athletic coach and administrator, rising to become Additional Director of Sports before retiring after 37 years of service.

“Today most of our athletic coaches don’t have a fundamental knowledge of training athletes. Most of them get updated from the internet or by copying the schedules of other coaches. Some school athletes have fallen victim to such unqualified athletic coaches. Some of these athletes who are between the age of 18 to 20 run the 100 metres really fast. I can’t believe it. However, when they reach 20 or 30 years, they lose their speed. The problem is these coaches try to develop them fast by providing them various supplements. By consuming unwanted supplements they end up like broiler athletes,” said Sunil and Badra Gunawardena.
“Although today there is a Sports Medicine unit, there are no facilities to test each and every athlete. Even if some of them are caught for using prohibitive substances, the punishment is not clear. That is why most coaches take advantage of this situation. After our triumph at the 1974 Tehran Asian Games, the best athletes emerged during the 90s decade. They were Darsha, Sugath, Sriyani, Susanthika and Rohan among others. They were in prime condition for nearly ten years taking part and winning medals in various competitions such as the South Asian Games, Asian Championships, Asian Games, Commonwealth Games and 2000 Sydney Olympics. Furthermore, the Sri Lanka and Asian records set by Darsha, Sugath and Susanthika have yet to be broken. However, today’s athletes won’t survive in the sport for a long time. Although they may win gold medals, they will be unable to improve on their personal best performances.”

“The best example of this is the South Asian Games (SAG) in Kathmandu. Although athletes won 15 gold medals, they could not achieve their personal best. They are also like broilers. We need a long-term development plans to sustain athletes for a long time. The technical knowledge of coaches should also be upgraded. If we don’t have a future plan, we will be unable to nurture the talented athletes who come out of schools every year to even national level,”