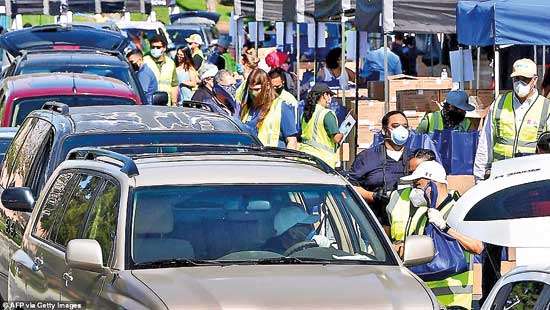 Hundreds of Americans lined up to access much-needed food handouts in Los Angeles and Prospect, Pennsylvania, on Tuesday.

The City of Angels’ reputation for being one of the wealthiest parts of the US – home to the Hollywood elite – appears to be a distant memory, as residents waited to access food to be able to feed their families.

An aerial photo revealed a community pool – which would usually be packed full of people enjoying the heatwave – lying abandoned and covered over, as people flocked to the area not for a swim but to sit in their cars and line up alongside it to enter the food bank area.

Gallons of milk were passed through car windows, at the event run by the Los Angeles Regional Food Bank and the city Tuesday.  One volunteer held up a sign reminding drivers to open their trunks so volunteers could put bags and boxes of food in their cars without people making unnecessary contact with each other. Residents are feeling the toll of the pandemic economically, with the city expecting around 3,000 families facing food or economic insecurity to descend on the food bank in a single day in desperate need of food.