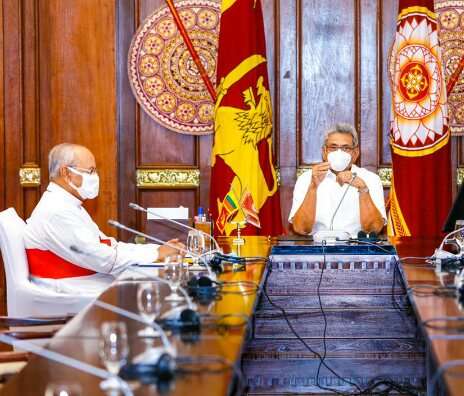 Commenting on the Easter Sunday attacks, President Gotabaya Rajapaksa said today that the objectives of a suicide attack go beyond just killing scores of people.He said that it is the endevour of the Government to identify those who are behind the sinister motive.President Rajapaksa expressed these views at a meeting held with the Maha Nayake of Kotte Sri Kalyani Samagri Dhrama Maha Sanga Sabha, Most Ven. Dr. Iththapana Dhammalankara Thera and His Eminence Malcolm Cardinal Ranjith at the Presidential Secretariat today. While inquiring about the progress of investigations on Easter Sunday attacks, Cardinal Malcolm Ranjith has emphasized the need of identifying masterminds of these cowardly attacks, the PMD said.