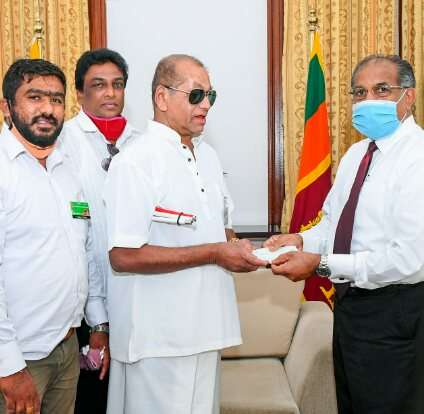 The balance of the COVID-19 Healthcare and Social Security Fund has surpassed over Rs.585 million with the public donations made by today, the President’s Media Division said. Mr. Sarath Kumara Gurusinghe, a retired teacher residing in Nugegoda donated his pension for the month April to the COVID-19 Healthcare and Social Security Fund. Furthermore, Mr. Uyanahewage Ashoka , who has lost his vision also donated Rs. 0.5 million to the Fund. “Expressing their views they said that in this context, the contribution made by them to this Fund could be considered as a humanitarian duty performed by them as citizens of the country,” the PMD said. Minister Chamal Rajapaksa handed over a donation of Rs.25 million collected by the Essential Food Commodities Importers & Traders Association to President Gotabaya Rajapaksa while Minister Dullas Alahapperuma, the President of the Sri Lanka Cricket, Shammi Silva, Sri Lanka cricket captain Dimuth Karunaratne and cricketer Lasith Malinga handed over a donation of Rs.25 million collected by the Sri Lanka Cricket to the President. Minister Ramesh Pathirana handed over a donation of Rs. 7 million collected by the staffs of the Ministry of Plantation Industries and Export Agriculture and affiliated institutions to the Ministry, to the President. Donations of Rs. 10 million by the Airport and Aviation Services (Sri Lanka) Ltd., Rs.1 million each by the Public Officers’ Welfare Association and Irrigation Engineering Diplomate Association, Rs. 10 million by Kalutara Bodhi Trust Fund, Rs. 5 million by Mr. Mano Sekaram, Rs. 2.5 million by Association of University Administrators, Rs. five hundred and fifty thousand by the Immigration and Emigration Officers Association, Rs. 125,000 by the Public Finance Department and Rs.1.5 million by the National Youth Services Council were handed over to Mr. K.B. Egodawele, Director General (Administration) of the Presidential Secretariat. The balance of the Fund has surpassed Rs. 585 million as of today’s evening. All the donations will be credited to the special account opened under the number 85737373 at the Corporate Branch of the Bank of Ceylon. Local as well as foreign donors have made their contributions to the Fund. Donations to COVID-19 Healthcare and Social Security Fund have been exempted from taxes and foreign exchange regulations. Deposits can be made through cheques or telegraphic transfers. Further details can be obtained from Mr. K.B. Egodawele, Director General (Administration) of the Presidential Secretariat through the telephone number 011-2354354,” the PMD said.