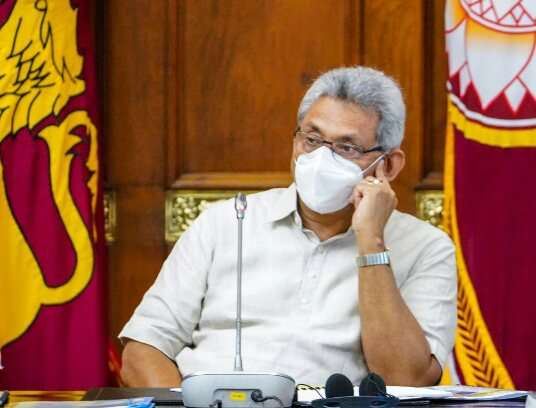 The danger posed by the COVID-19 pandemic in Sri Lanka is yet to pass but the restrictions imposed on the ‘low risk’ districts could be lifted by the end of the Sinhala and Tamil New Year Season, the President’s Media Division (PMD) said today. This has been observed at a meeting Presided by President Gotabaya Rajapaksa, and took place at the Presidential Secretariat to review the progress of the COVID-19 prevention program and to decide on the steps needed to take this program forward. The PMD said President of Government Medical Officers Association (GMOA) Dr. Anuruddha Padeniya has analyzed the manner the virus had affected the country geographically and the Government’s actions to control the spread. “It was noted that the Government’s timely actions from when this virus first entered the country helped manage to keep the situation under control. It was also noted at the discussion that the steps adopted henceforth had helped officials to correctly identify both the infected and those who had been compromised due to associating the infected. However, it was also perceived that the danger is yet to pass. At the same time, it was observed that except for the few districts identified as high risk zones where the most number of COVID-19 patients were found, the spread of the virus at present does not pose a threat to other districts. Therefore, there is a possibility that the current restrictions imposed on these districts could be lifted by the end of the Sinhala and Tamil New Year season. The current prevention programmme will thus continue as it is until this period. Thereafter, a decision as to the next step to be taken will be considered after further studying the situation. Headed by President Rajapaksa, this COVID-19 prevention programmme so far had been based on the professional advice from the health, medical, security and legal expertise. The programme will continue to rely on these expertise until the crisis is brought under control. The on-going processes will continue to monitor the pandemic from a global context whilst studying the guidelines issued periodically by the World Health Organization. Comparing these results and recommendations with the prevailing situation in Sri Lanka, the programme will be updated as suitable and needed. Not only COVID-19 positive patients, but also those suspected to have contracted the virus and those who had been in close association with these two groups will be regularly and repeatedly tested. This is in line with the procedures followed by countries that have successfully brought the spread of this virus under control,” the PMD said. Advisor to the President Lalith Weeratunga, Former Western Province Governor Dr. Seetha Arambepola Secretary Defence (Rtd) Major General Kamal Gunaratna, Army Commander Lieutenant General Shavendra Silva, Acting IGP C.D. Wickramarathna, GMOA officers and the Chairman of Information and Communication Technology Agency of Sri Lanka Jayantha de Silva joined the discussion.