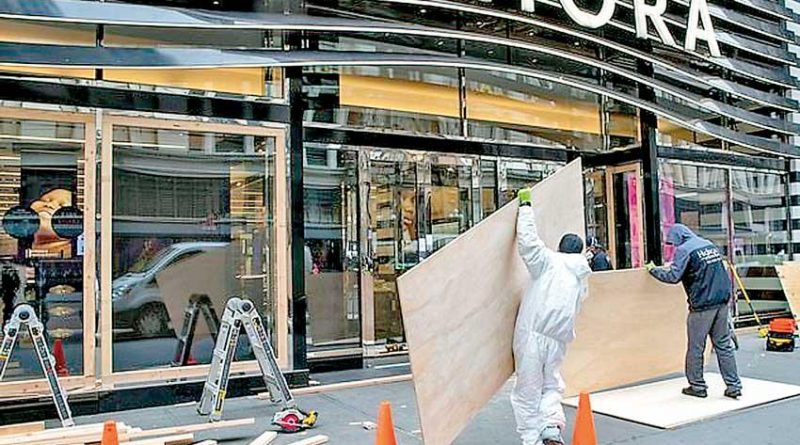 In New York, carpenters in protective gear were seen boarding up a closed beauty store in Manhattan (DM)

US, (Daily Mail), 23 March 2020 –  Ohio and Louisiana have joined nine other states in ordering residents to stay at home to help curb the spread of the coronavirus.
Ohio Governor Mike DeWine and Louisiana Governor John Bel Edwards announced the ‘stay at home’ directives at press conferences in their respective states on Sunday.

The orders affect some 16 million residents across both states and exempt those who work in essential services such as healthcare and the food industry.
‘The bottom line is we are in a race against time when it comes to this coronavirus and it’s rapid spread in Louisiana,’ Edwards said, as the number of cases in his state surpassed 830, including 20 deaths.

An estimated three million Americans will file unemployment claims next week, marking the highest number of new jobless claims ever seen in US history.

Fears are ramping up around how many Americans will find themselves on the breadline, struggling to survive and feed their families, as President Donald Trump warned that the pandemic is escalating to a level that he may throw the entire nation into lockdown for two weeks.

An estimated three million Americans will file unemployment claims next week, marking the highest number of new jobless claims ever seen in US history.