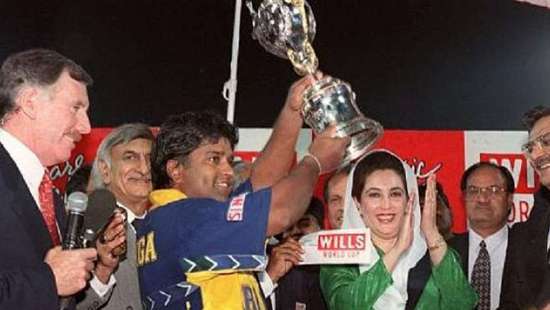 On March 17, 24 years ago, Arjuna Ranatunga led Sri Lanka to an unlikely World Cup win and completing a quintessential Cinderella story in what is still the country’s crowning cricketing achievement.

It was a night that Sri Lankans fell in love with the game and made its catalysts national heroes and household names that would inspire and influence the next generation of cricketers.

It was a night that Ana Punchihewa, roundly considered the gold standard of cricket administration in the country – instrumental in creating the best possible support structure for a talented group of cricketers to achieve unlikely success – remembers clearly.

“I was there (in Lahore) as President of the Board of Control for Cricket in Sri Lanka (now Sri Lanka Cricket) and I remember the winning run and Benazir Bhutto handing the trophy over to Arjuna,” Punchihewa recalled to the Daily Mirror, about that night.

He had become the President of the BCCSL in February 1995, four months after the position was left vacant with the assassination of Gamini Dissanayake, but took over at a time where the sport lacked the appeal and success it has achieved since.

“It was a time before lucrative television rights deals, so when I took over we had only Rs. 300,000 in the accounts. We said to Arjuna and the players that we won’t interfere and pressure them from outside, and gave them a strong backroom. We were able to hire Dav Whatmore, and afford his salary of AUD 100,000 a year, because of money we received from Cricket Australia. We also recruited Alex Kountouris, and paid his AUD 80,000 salary through a donation made by the Sri Lanka Cricket Foundation of New South Wales,” Punchihewa added.

They were worthy investments considering that not only did Whatmore turn that group of players into world beaters, but Kountouris ensured that Sri Lanka could field its best XI for all their World Cup matches.

“In the year he was with us, I don’t think we had any injuries, because Alex had a specific fitness plan for each player.”

About Ranatunga’s leadership skills Punchihewa had no doubts having seen it in the former captain’s formative cricket days.

“Arjuna was the best leader. He had shown leadership skills all along and having seen him as a schoolboy captain, I could really see those skills. Everyone respected him,” Punchihewa said adding, “He also had the strong support of Dav Whatmore, Duleep (Mendis) who was team manager and Anura Tennakoon, who was the board’s Secretary at the time.”

Punchihewa’s contribution didn’t end with putting in place a structure, with a more crucial action ensuring that Sri Lanka were not unjustly penalized in the run up to that World Cup.

“What a lot of people don’t know is that I got us four points, even before the World Cup started,” Punchihewa stated.

At an ICC board meeting days before the World Cup, Punchihewa was informed that Australia and West Indies, who had refused to travel to Sri Lanka for their group matches following a terrorist bombing on the Central Bank, would receive two points each for their forfeited games against Sri Lanka.

“I asked them why they were the ones getting the points as a result of their refusal to travel to Sri Lanka,” Punchihewa said.

Ultimately the matter went to a vote, and after initially appearing like the cause would be lost, Punchihewa was able to convince India and Pakistan to vote in Sri Lanka’s favour the next day when a final vote was taken.

“I convinced the ICC President at the time Clyde Walcott to have the second day’s vote early in the morning. Fortunately for us, the New Zealand Cricket board had not arrived at the time of the vote and we were able to win that decisive vote which meant we would get the two points instead of Australia and West Indies. That gave us four points,” Punchihewa recalls.

That also brought up another problem for Punchihewa, which led to the truly unique solution of an Indo-Pakistan joint team.

“Australia’s and West Indies’ refusal to travel to Sri Lanka meant that we only had Kenya and Zimbabwe to play in the group stage. After the vote, the representative from Kenya pulled me aside and said that they didn’t want to be the first team to play in Sri Lanka (after the bombing). So I took him, and the representatives from India and Pakistan, and we discussed a possible solution,” Punchihewa recalls.

It was there that India and Pakistan agreed to send a combined team to Sri Lanka days before the World Cup was to begin, to play an exhibition match that would underline that the country was safe again.

“They couldn’t decide which colour to wear,” Punchihewa joked, “so we decided to play the game in white clothing with a red ball.”

Was the fact that Sri Lanka received four points without having to play the two stronger teams in the group possibly the biggest reason in winning the World Cup?

“Not really,” Punchihewa answered. “We had a good enough team to beat them, and in fact we had had some good results over the previous years, winning series in Pakistan and New Zealand, and getting to the final of the triangular series in Australia the previous December.”

That World Cup win, on that March 17 night, did come with its negatives however, as the popularity of the game shot up overnight and its lucrative nature eventually attracting individuals whose interests were seemingly on the business rather than the sport itself.

He was ousted from his position almost immediately after Sri Lanka won the World Cup.

“I lost the SLC elections two weeks later,” Punchihewa, a man to date praised for his honest work, said.

Sri Lanka has twice come close losing to Australia in 2007 and India in 2011, but the exodus of world class players and the revolving door of selections has pushed the country further away from achieving this dream.

“I would also say we haven’t evolved with the times since then, the same way other countries have,” Punchihewa added pointing out why Sri Lanka hasn’t reached the summit of the sport again.

Perhaps Punchihewa may know how to get there again.