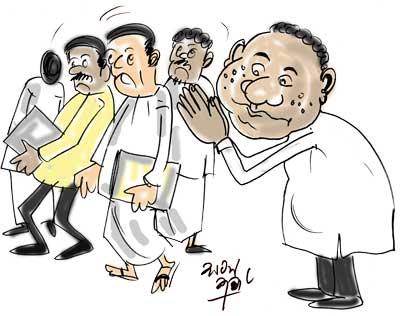 A prominent political high-up who once had to languish in the State lodge for shooting off his mouth had to face a very embarrassing situation the other day due to letting his tongue loose at an official conference held in an area with a cool climate.

The political high-up stirred up a hornets’ nest at this conference when he stated that a certain family residing in an official bungalow should be ejected pronto. The heads of local bodies loyal to a party leader in the upcountry estate sector had immediately been up in arms against the proposition made by the prominent political high-up. The irate heads of local bodies had one by one started accusing the politico of a variety of corrupt practices that the latter had resorted to using his political clout. One of them told the politico that they knew how he had put up mansions on properties acquired by illegal means.

Realising that he had bitten off more than he could chew the political high-up hurriedly made an apology to the protesting participants. Worshipping the protesters with joined hands and a winning smile he had said: “…Please don’t take offence. I withdraw the suggestion I made…”

A situation that could have become far worse for the political high-up was thus averted; they say.