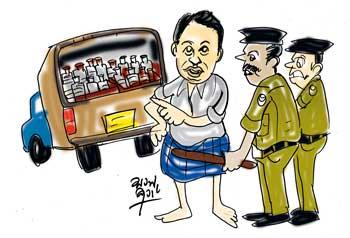 The uniformed men had the other day seized a large haul of moonshine while being transported in a lorry by a businessman, known to be a buddy of a prominent politico.

The businessman had later been released on payment of a fine of Rs. 500,000 when he should have been subjected to a fine as high as Rs. 20 million, they say.

Some 30,000 bottles of hooch had been found packed inside the lorry.

This businessman getting ready help from several politico-buddies from both the government and the Opposition is said to have made a fortune by selling moonshine distilled using artificial ingredients at a relatively cheap price, they say.