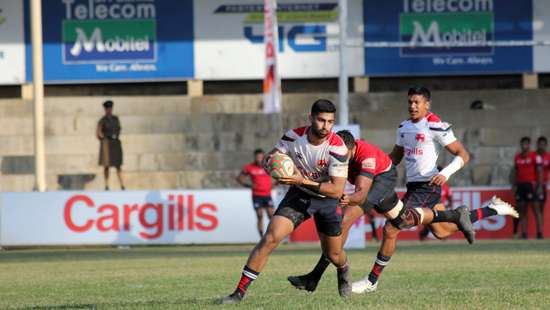 Kandy Sports Club continued their winning streak when they outplayed CR and FC by 39 points (six tries, three conversions and one penalty) to 15 points (two tries, one conversion and one penalty) in their Dialog Inter-Club League Rugby Tournament second-round fixture worked off at the Nittawela Stadium in Kandy today (23).

At the breather Kandy SC led 10-3. Kandy SC drew first blood in the third minute through a sweeping three quarter move and Buddhima Piyaratne touched down.

Late in the first half, Mursheed Zubari put over a penalty for the Red Shirts.

After the turnaround, Kandy SC scored through a forwards rush when their number eight Buwaneka Udangamuwa went over the line. Tharinda Ratwatte missed the conversion.

Kandy SC kept on attacking and scored their third try through a reverse pass by Roshan Weeraratne with hooker Damith Dissanayake going over the try line. Ratwatte added the extra points.

CR scored their first try through hooker Supun Warnakulasuriya. However, Kandy SC were unstoppable as Dissanayake went over for his second try.

Buwaneka’s younger brother Bawantha Udangmuwa made a late entry in to the game and scored his first try for Kandy SC.

Ratwatte who had a magnificent game then put over a penalty and helped his team remain unbeaten in the League.