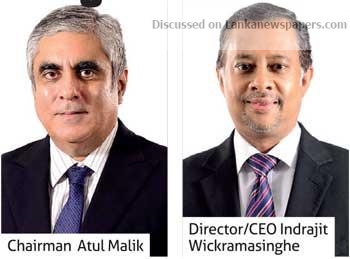 Union Bank of Colombo PLC reported higher earnings for the period ended September 30, 2019 (3Q19), but the core-banking operations remained muted due to slower growth in new loans as the country’s depressed economy looks for a catalyst beyond low interest rates to do the ticking.
The bank reported 32 percent year-on-year (YoY) growth in net interest income to Rs.1.52 billion for the quarter under review through, ‘portfolio realignment’, which enabled the bank to continue to raise its margins.
“The results of the macro economic shocks that prevailed throughout continued to affect the banking sector performance in the 3rd quarter of 2019. Despite policy rate revisions, the demand for private credit remained flat, affecting balance sheet growth through the 3rd quarter of the year,” Union Bank said in an earnings release.  The bank had a net interest margin of 3.83 percent by the end of September compared to 2.98 percent at the beginning of the year.

The higher net interest income and the margins to a degree were possible due to the bank losing high cost term deposits worth Rs.7.1 billion during the nine months. This was partly funded through the short-term borrowings, which were less costly relative to the customer deposits.
The bank had a deposit base of Rs.74.7 billion, which was down by Rs.4.6 billion.
The loans and advances book rose by Rs.1.2 billion during the nine months to September 30 to Rs.77 billion.
Half of the growth came from consumer loans or credit cards. As a late entrant, Union Bank offered aggressive discounts on their credit cards and balance transfers from other bank cards.
“The bank’s credit card portfolio further expanded on the back of focused sales and acquisition campaigns supported by a gamut of attractive lifestyle offers in diverse segments such as leisure, dining, shopping etc,” the bank said.
Union Bank reported earnings of  23 cents a share or Rs.245.6 million for the three months under review compared to14 cents a share or Rs.149 million reported for the same quarter last year.
For the nine months ended September 30, the bank reported earnings of 52 cents a share or Rs.568.7 million compared to 39 cents or Rs.424.7 million in the corresponding period of last year.
The net interest income for the nine months was up 21 percent YoY to Rs. 4.0 billion.
The net fee and commission income also rose 4 percent YoY to Rs.700.4 million.
Union Bank provided Rs.468.7 million from profits for possible bad loans during the nine months, up 30 percent YoY.
The bank’s gross non-performing loan ratio rose to 5.22 percent from 3.68 percent at the beginning of the year.
Union Bank in early September said it was exploring strategic options for its subsidiary, UB Finance Company Limited, which could range from a divestment, merger, restructuring or a spin-off.
The US-based Culture Financial Holdings Limited holds 70.55 percent stake in Union Bank.