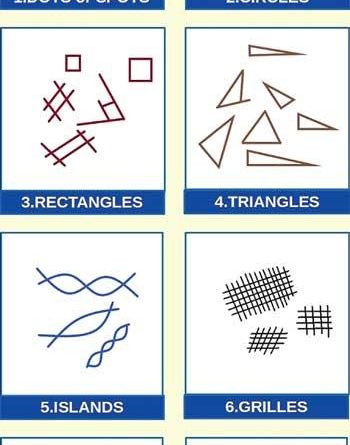 We have already discussed the main lines and the secondary lines in the hand in some detail. There are signs in the hand which are no less important than the lines.

Signs in hand produce results mainly in three ways.  Some signs add strength or weaken the effect of a Mount or would produce an entirely different effect because of its presence on the Mount in question.
There are certain signs that strengthen or weaken the main lines or give the line an entirely new effect during their presence.

They signify a bad illness generally of nervous character

There are certain other signs which signify results independent of a particular Mount or a Line.
There are eight main signs commonly found in hands which are considered very significant: They are:
The Spot or Dot
The Circle
The Square or Rectangle
The Triangle
The Island
The Grille or the Net
The Cross
Stars
The Spot or the Dot: These are not frequently seen in palms but are worthy of notice. Dots vary in size and depth.  Dots are always a defect whether they appear independently or on lines or on Mounts.  They signify a bad illness generally of nervous character.
1. The Spot or Dot: The renowned palmist Cheiro says a Spot or a Dot is a temporary arrest of the qualities of any line on which it may be found.
2. The Circle:  Favourable on the Mount of Sun and unfavourable in certain other positions.  For examples, a Circle on the Mount of Moon signifies death by drowning. A Circle on the Mount of Jupiter indicates success. A Circle on the Mount of Saturn indicates that the subject would get sudden wealth through speculation, gambling or a lottery.
3. The Square or the Rectangle:  The Square is usually called the mark of preservation.  It signifies escape from danger at the particular moment indicated by its position. If a Square appears on the Line of Life the subject has or is to escape from death, depending on where the sign occurs.
The Square signifies other effects as well. For example, if it appears on the Mount of Jupiter, the subject becomes a successful administrator.  If there is sign of a square on the Mount of Saturn, the subject surprisingly escapes death repeatedly.