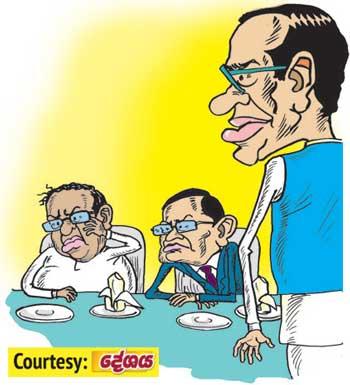 Number One the other day arrived in a high-end hotel to attend the wedding of the son of a leading businessman.

When he walked into the wedding hall, he found a seat reserved for him at a table where several other politicos were already seated. The politicos seated at the table immediately exchanged greetings with Number One. But there were two persons at the table, who completely ignored Number One.

One of the duo, who ignored Number One, was a former Blue party secretary representing the Colombo district. He also functioned as a top team member for about two years under Number One. The other politico who did not care to greet Number One was a professor holding high office in Pohottuwa. He had given a wide berth to some top men of the Blue party ever since he was denied a slot on the National List in 2015. The uneasy moment passed over almost unnoticed with everyone being discreet about it, they say.