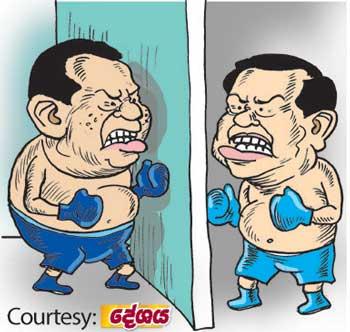 Two ‘Nayakes’ looking forward to contesting the Nuwara-Eliya district on the Pohottuwa ticket are said to be already in a battle over the preference vote. Both of them know that Nuwara-Eliya, given its predominant estate sector vote, is not big enough for two ‘Nayakes’ and each is out to eliminate the other from the scene.
One of these two Nayakes is a politico hailing from Walapone. A blue party stalwart, he had hitched his political wagon to the former strongman right from the beginning of the party split. The other Nayake hailing from Hanguranketa suffered defeat at the 2014 general polls but was fortunate enough to make it to Diyawanna through the National List in 2015.
The two Nayakes are said to be equally determined to enter Diyawanna council from Nuwara-Eliya though both are keenly aware of the fact that the preference vote in store is hardly sufficient for either to share. So, they both have decided to seek a solution to this problem from the former strongman.
In the event of the former strongman refusing to interfere in the matter, the ‘manapa-pore’ now raging behind the scene may soon shift to the political stage, they say.