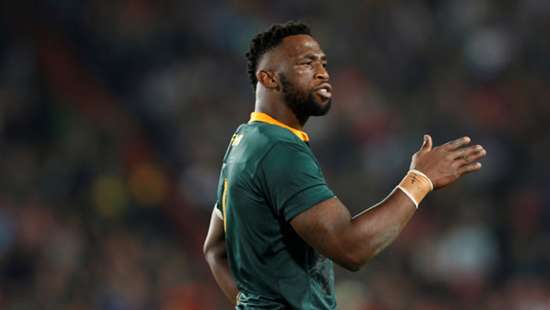 Springbok coach Rassie Erasmus named a full-strength side to play Japan, as the two-time champions bid to put down a World Cup marker and avenge the biggest upset in the game’s history.

Captain Siya Kolisi comes back into the side after fully recovering from a knee injury — the only change from the 23 selected for the 16-16 in New Zealand in July that set South Africa on their way to winning their first Rugby Championship.

Western Stormers flanker Pieter-Steph du Toit wins his 50th cap and there is also a starting berth for lock Eben Etzebeth, who has been forced to deny allegations he pointed a gun at a homeless person last month.

“I hope this selection will send a strong message that we have the utmost respect for Japan,” Erasmus said.

“Perhaps we made the mistake of complacency against them in the past but we’ve been hammering the message all week that we should never do that again against Japan,” added the coach.

“This Test is as big a challenge as any we’ve had this season,” stressed Erasmus.

Friday’s clash marks the first time the two sides have met since the World Cup’s greatest upset in 2015, when the Brave Blossoms, coached by current England supremo Eddie Jones, stunned the Springboks with a 34-32 win dubbed the “Miracle of Brighton.” Nine of the 23-man match squad played in that game and Erasmus revealed that it had served as motivation in the run-up to Friday’s encounter.

“That kind of result can easily happen again if we don’t learn from the past,” warned the coach.

With just over two weeks until the Rugby World Cup kicks off, South Africa are one of the favourites after winning the Rugby Championship for the first time after victories against Argentina and Australia and the draw in New Zealand.

South Africa will face the All Blacks again in their blockbuster Pool B opener in Yokohama on September 21 with both teams aware that no team has ever gone on to lift the Webb Ellis Cup after losing a pool game. They will also face Italy, Canada and Namibia with the top two in the pool progressing to the quarter-finals.

Japan coach Jamie Joseph has admitted his team, now ranked ninth in the world, can no longer rely on the element of surprise, having acquired a reputation for playing an attacking and effective style of rugby.

Joseph has set Japan the goal of reaching the quarter-finals for the first time in their history.

The hosts kick off the World Cup against Russia on September 20 and will also face Samoa, Ireland and Scotland in Pool A.