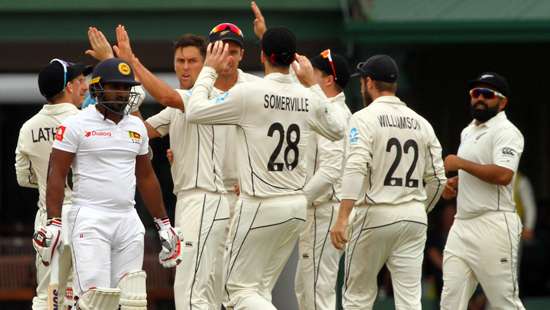 New Zealand’s fast bowlers made the most of favourable conditions to place Sri Lanka in a tricky position on day two of the second test match of the series. Only 29.3 overs of play were possible on day two with the heavens opening up at the end of the morning session and continuing to wipe out the rest of play.

Overnight batsmen Dimuth Karunaratne and Angelo Mathews were greeted to a disciplined spell of bowling from Trent Boult and Colin de Grandhomme early up amid overcast conditions. Boult struck in his third over of the day when he got Angelo Mathews to feather a short ball down the leg side straight into the gloves of wicketkeeper BJ Watling. The dismissal was the left-arm quick’s 250th test wicket for New Zealand and he followed it up with number 251 soon afterwards when he got Kusal Perera to shoulder arms to one that nipped back in.

Boult very nearly had a third when Dhananjaya de Silva skied what should’ve been a simple return catch back to the bowler. The usually safe Boult only had himself to blame for spillingthe straightforward chance.

Dimuth Karunaratne meanwhile brought up his twenty-third test half-century and battled gamely to counter some testing bowling from the Kiwis. He too had a stroke of luck when Kane Williamson failed to latch on to a tough chance at short midwicket off the bowling of Ajaz Patel. De SIlva and Karunaratne took the total up to 130 before Tim Southee was rewarded for his accurate bowling with a double wicket maiden, catching the outside edge of both Karunaratne and Niroshan Dickwella to leave the hosts on a precarious 130 for 6.

De Silva moved up to 32 and took his side through to the lunch break alongside the returning Dilruwan Perera just as the rains started to fall down. Such was the control exhibited by the New Zealand bowlers that only 59 runs were scored in the morning session. The weather failed to relent thereafter and play was eventually called off at 3:32 pm.

The visitors will be pleased with their efforts so far in the test match but will need the weather to be more cooperative if they are to entertain any thoughts of levelling the series. For the hosts, another crucial passage of play awaits them today morning should play get underway on time.