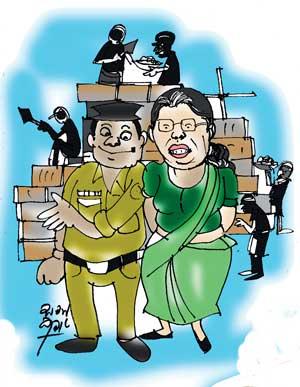 This uniformed high-up of a state-run lodge – a namesake of a failed Kandyan king- is known to have secured his job thanks to the influence of a political bigwig.

He is said to be abusing his position by employing the mates of the lodge as a labour gang at the construction site of his new house.  He gets these mates to change into casuals before starting work at the site.
Several subordinates have already sent petitions to the political authority concerned pointing out the illegal activity this high-up has been resorting to from the time he assumed the high office at the lodge, they say.