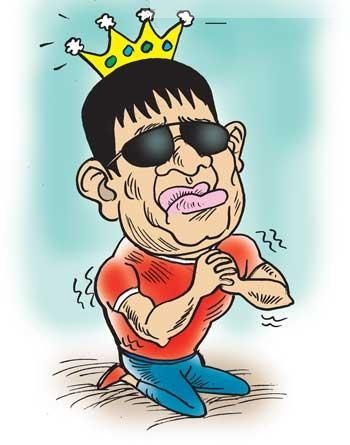 The actor-turned politico shot his mouth off again by accusing some ‘men in robes’ of sexual misconduct. And highly disconcerted Diyawanna politicos of the governing alliance have now decided to teach the irrepressible actor a lesson.
Both party members and the leaders of the alliance constituents had the other day made a collective request to the Green leader to relieve the actor of his purohita status.
They had told the Green leader that Khema’s son had done irreparable damage to the party with his attack on monks at a time when the Opposition had mounted a campaign to dub the Green party as being anti-Buddhist. And now the actor had added insult to injury aggravating the situation for the government.
Meanwhile, the Green leader had called for the actor’s explanation. The politicos up in arms have warned the Green leadership that they could expect nothing but a bitter defeat at the coming polls if they failed to take deterrent action against the actor for antagonizing the bhikkhu community in the country.