A fair zonal director of education, who called at a school, dressed in short skirt and sporting a ‘top knot’ hair bun had kicked a big row with female teachers, who faulted her for her unbecoming attire. 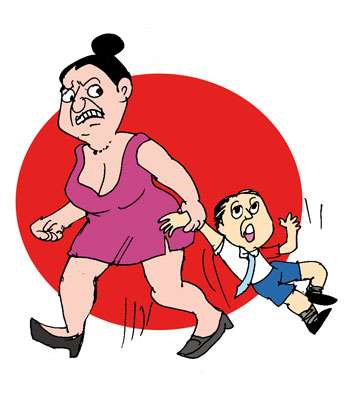 When the fair one called at this school in an area of ancient kingdom fame, the female teachers had pointed out to her that she had failed to observe the dress code meant for mothers of children visiting the school during class hours.
However, the lady reacting with anger to their reproval had reportedly screamed invectives at the teachers and threatened to transfer them all out to difficult stations “tomorrow itself” for not treating her with due respect.
The teachers had replied: “Madam, you may be holding a high, influential position. But you have no right to violate the dress code meant for mothers!”
The teachers’ reply had further enraged the fair one, who had retorted:
“I am going to speak to the Minister about you and teach you all a good lesson… I do not want to keep my child in this school for another minute.  Let me have her school leaving certificate immediately!”
She had left the school with her child later, they say.