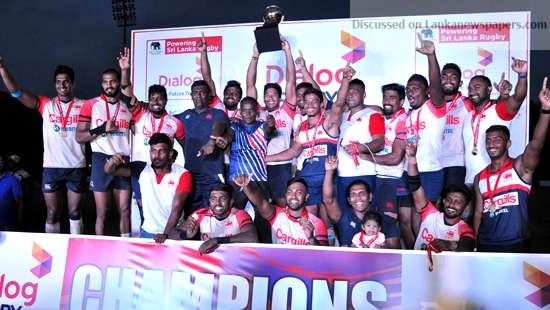 Kavindu Perera who captained CR and FC last season came back to haunt his former side with Sri Lanka club rugby powerhouse Kandy Sports Club who claimed the Inter-Club Sevens rugby title beating the Red Shirts by 24 points (four tries and two conversions) to 12 points (two tries and one conversion) in the final played at the Racecourse Grounds in Reid Avenue yesterday
Perera was in sensational form right throughout the tournament and produced his best performance in the final.
Having opened scoring, the former Vidyartha College speedster added one more try while Lavanga Perera and Jason Dissanayake also touched down.
The Red Shirts under new Skipper Reeza Raffaideen managed only a couple of tries with the captain himself scoring one try while the other try was scored by Janidu Dilshan.
Earlier, Kandy SC faced a tough semi-final against Havelock SC who had some very promising players in their squad such as Naveen Henakankanamage and Dinuk Amarasinghe.
But Kandy SC made light work of them sealing a comfortable 29-5 win.
It was such a dominant display that Kandy SC were down to six men at one stage in the first half leading 7-0 and that was Havelock SC’s best opportunity to get a try or two.
But Kandy SC were so talented that they finished the first half with two more tries as Kavindu Perera and Danushka Ranjan crossed the whitewash.
Results: