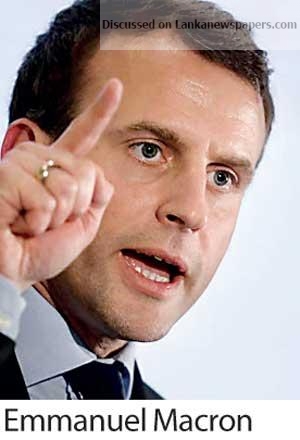 BRUSSELS (AFP) – Negotiations between Europe and South America to finalise a blockbuster trade deal continued yesterday, after French President Emmanuel Macron sent a warning shot to Brazil over environmental issues.
Ministers from the South American trade bloc known as Mercosur and top EU officials are hoping to seal what would be one of the world’s biggest regional trade agreements but stumbling blocks remain.
“Meetings between the EU and Mercosur continue and each party is working hard to overcome the remaining differences,” a source close to the European Commission told AFP, at the talks in Brussels.
Another source on Thursday described the agreement as “still up in the air”.
But Macron has threatened to snub the deal if Brazil withdraws from the Paris climate accord that commits signatories to reduce emissions and which Brazil’s President Jair Bolsonaro has threatened to leave.
“If Brazil leaves the Paris accord, we could not sign trade deals with them,” Macron said Thursday night in Japan en route to Osaka for the G20 summit, which kicked off yesterday.
“The reason is simple, we are requiring our farmers to stop using pesticides our businesses to reduce emissions. That has a competitive cost,” Macron added.

Activists have already urged the EU to halt the Mercosur trade talks over Brazil’s alleged harm to its rainforests and indigenous peoples.
German Chancellor Angela Merkel said she wanted “straight talk” with Bolsonaro over “dramatic” deforestation in the Amazon rainforest.
However, Merkel also said the issue would not hold up the trade deal and believes it would boost Europe’s economy and ultimately benefit the rainforests in Brazil.
Discussions between heads of state are expected to be held on the sidelines of the G20 summit.
Two decades of EU negotiations with the countries of Mercosur grouping Argentina, Brazil, Paraguay and Uruguay have repeatedly stalled over the highly sensitive beef market, with cattle farmers in Europe furiously against any deal.
Last week Ireland, Belgium, Poland and France expressed their concerns for farming to European Commission President Jean-Claude Juncker.
Pro-trade members meanwhile have staunchly backed the pact, which would mark a blow against protectionism, with US President Donald Trump caught in a trade war with China that is destabilising the world economy.
More recently, differences have emerged with Brazil over trading meat, sugar and automobiles.
“The political context is quite charged in Europe. The anti-trade rhetoric is strong in many countries, including pro-trade ones,” said an EU diplomat.
The increasingly acrimonious debate resembled the pushback against a highly ambitious trade deal with the United States, known as TTIP, that triggered mass protests in Germany, Austria and France a few years ago.
EU sources said Europeans await progress from the South Americans on geographical indications that protect European products such as cognac and Manchego cheese and especially on the opening up of their auto sector.
The EU would like to see the deal passed before the end of the current commission’s term later this year.