Sri Lanka’s banking sector asset quality took a plunge in the quarter ended March 31, 2019 (1Q19) from end-December 2018, while the deterioration was sharper when compared with the corresponding three months of the previous year.
A surge in the non-performing loan (NPL) ratio of the licensed commercial banks was much vivid across the two comparing periods, as the banks were hit with defaults coming from the spurt in credit growth in the preceding three years, triggered by the loose monetary and fiscal policies. 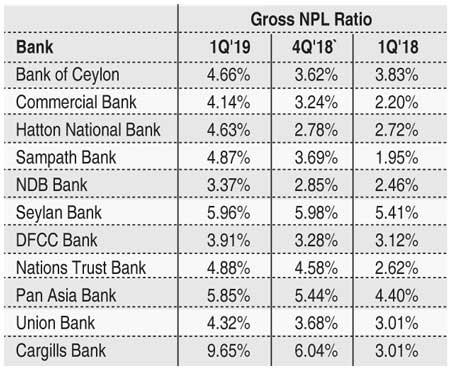 According to the data compiled by Mirror Business, the banking sector NPL ratio has risen between 0.3 percent at the lower end and 3.61 percent at the higher end, between December 31, 2018 and March 31, 2019.
The comparison makes a stark contrast when the two data sets – March 2019 versus March 2018 – were put side by side, as the ration rises from a low of 0.55 percent to a high of 6.64 percent.
By March 31, 2019, none of the banks that released the interim results to the Colombo Stock Exchange had their NPL rate south of 3.37 percent, except for NDB Bank PLC. In fact, that also was up from 2.85 percent in December 31, 2018 and 2.46 percent in March 31, 2018.
Sampath Bank, which stood as the benchmark bank for the best asset quality, lost the title as its NPL ratio shot up from 1.95 percent in March 31, 2018 to 3.69 percent in December 31, 2018 and further to 4.87 percent in March 31, 2019.
Commercial Bank of Ceylon PLC, Sri Lanka’s largest private lender, had its NPL ratio at 4.14 percent by March 31, 2019, up from 3.24 percent in December 31, 2018 and 2.20 percent in March 31, 2018.
Sri Lankan banks went on a lending binge from personal loans to leases to business loans since the beginning of 2015, when the present dispensation relaxed the monetary policy through a highly politicised Central Bank under the then Governor Arjun Mahendran, who is now absconding law due to his alleged involvement in a mega bond scam.
The shock of the bond scam reverberated through the economy sending ripples across sectors, pushing up the rates. But the continuous money printing kept the rates artificially low, which led banks to lend over and above what they raised through deposits.
Much of such lending ended up paying for imports, which in turn busted the rupee and pushed the economy on the verge of a balance of payment crisis, forcing Sri Lanka to go with a begging bowl to the International Monetary Fund for a bailout package.
Things changed thereon as rates rose and the fiscal austerity set in by way of tax hikes and spending cuts as people were forced to tighten their belts.
Taxes and inflation bit into the earnings of the people and businesses as they struggled to service their loans, which delivered a significant blow to the asset quality of the bank. Another key reason for the banks to record a sharp increase in NPL was the de-growth in loans and assets during the March 2019 quarter, due to the sluggish economy caused by loss of business confidence and consumer spending.
While the Monetary Board cut the key policy rates recently and imposed deposit caps in a bid to rejuvenate lending, the April 21 terror attacks delivered a lethal blow to the economy, crushing even the slim prospects of a recovery in growth and improvement in asset quality, during the remainder of the year.
Hence, the banking sector analysts are of the view that the banks should now tread extremely carefully, specially due to the upcoming key polls and the policymakers’ desire for artificial propping up of the economy to win votes.