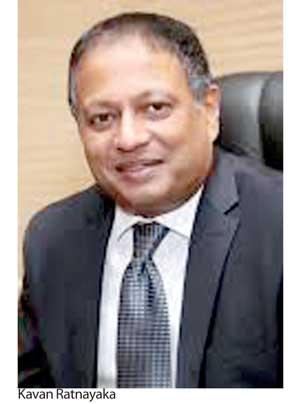 Ratnayaka made these remarks as some parties, including the SLPA trade unions, had objected to the formation of a terminal operating company (TOC) between the SLPA and the nominated parties from Japan and India, to develop the ECT.
“The stakeholders have raised their concerns on the Colombo Port running out of capacity. As the SLPA, we are particularly concerned on Maersk and Mediterranean Shipping Company (MSC).
We need to reassure their management, which plans the way out into the future that we are a port that can be trusted and we will provide them with the capacity required,” Ratnayaka told reporters in Colombo, yesterday.
Sri Lanka, India and Japan recently signed a memorandum of cooperation (MoC) for the development of the ECT.
According to the MoC, the SLPA would retain 100 percent ownership of the ECT and a TOC will be formed between the SLPA and nominated partners from Japan and India, of which the SLPA would hold a 51 percent stake.
Ratnayaka pointed out that the development of the ECT was held back for four years due to a controversy created from the procurement of cranes for the ECT.
However, he noted that so far one trade union had objected to the new arraignment while some have backed the deal.
“If one global consortium gets up and leaves Sri Lanka, we would lose 15 percent of our businesses; it could be even more and we will no longer be considered a hub.
The major part of what we are trying to protect is the hub status. The moment we lose the hub status, the businesses will get up and leave. Another competitive port will take the advantage of such a situation; this could even be the Hambantota Port,” he elaborated.
Maersk and MSC are the world’s largest container shipping lines by capacity. According to the SLPA, MSC alone accounts for 50 percent of transhipment volumes of the JCT.
“The trade unions have to realise that the ECT is needed for their survival. They have more at stake. Without the ECT, we can’t keep the JCT running and it will affect everybody’s well-being and salaries,” Ratnayaka pointed out.
The SLPA is expecting to receive a US $ 500 million concessionary loan from Japan International Cooperation Agency, at 0.1 percent interest rate, with a 10-year grace period and a 40-year tenure.
“We are also in discussions with them on the earlier loans taken for the JCT at an approximate interest of 2.4 percent. We are requesting those loans to be included into the new loan at the interest of 0.1 percent,” Ratnayaka said.
The government plans to form the TOC with the nominated parties of Japan and India in three months.
The SLPA has requested Japan, which is the lead investor, to nominate a consortium, including a shipping line as one of the nominated parties.
The Joint Working Group to finalise the agreement for TOC is expected to be appointed in coming days.
Ratnayaka said that a 49 percent stake of the TOC would be given to Japan and India based on the commercial terms and the tenure would depend on investments.
“Further, we asked for an early payment on the loan order as we can pay it out from the funds we receive for the 49 percent stake,” he added.
Phase one of the ECT is scheduled to come into operation within 12-18 months, under the proposed TOC.
The SLPA has already invested US $ 100 million in phase one of the ECT, while a further US $ 120 million investment is required to procure the required equipment.
Phase one of the ECT would have a handling capacity of two million TEUs while phase two would have a capacity of three million TEUs.
Once the ECT is in full operation, it would have a handling capacity of over six million TEUs while employing 1,000 persons.
The SLPA is also planning to build a back-to-back terminal between the South Asia Gateway Terminals and ECT.
Ratnayaka said that the ECT would be a vital step towards transforming the Colombo Port from a transhipment hub to a logistic hub.
Transhipments, which mainly arrive from India and South Asia, account for 80 percent of the Colombo Port’s operations while import/export shipments account for the remaining 20 percent.

SLPA to invest US $ 110mn to modernise JCT

The Sri Lanka Ports Authority (SLPA) plans to invest US $ 110 million to upgrade the outdated equipment of the Jaya Container Terminal (JCT).
The upgrade will include replacing the cranes of JCT 3 and JCT 4.
Further, the SLPA plans to invest in terminal facilities deploying new gate systems and new IT systems in the terminal.
SLPA Director Sarathkumara Premachandra said that the modernisation of the JCT would be implemented in a phased-out manner, within a period of 10 years.
The JCT is currently operating with cranes that are over 20 years old.
SLPA Chairman Kavan Ratnayaka said that the new operational model mooted for the East Container Terminal (ECT) would reduce the burden on the SLPA, allowing them to move ahead with the modernisation of the JCT.
Despite the trend towards deploying larger vessels, which would require deeper draft terminals to cater to, Premachandra noted that medium-sized vessels would still be in use in particular for niche trade between regions such as Australia and Africa.
“As the Colombo Port grows to the next level with deeper draft terminals coming up in the south port, the demand for large feeders will grow simultaneously and the niche trade won’t use large ships.
Elevating the status of the JCT into the next level, we are actually creating facilities for cascading ships,” he elaborated.
Ratnayaka also agreed that the JCT in the future potentially could be converted to a feeder terminal for containers.
Further, the SLPA is also on the process of investing US $ 50 million on JCT 5, as a separate project.
The SLPA received the Cabinet approval in April to purchase three ships-to-shore cranes worth US $ 25 million, for JCT 5.