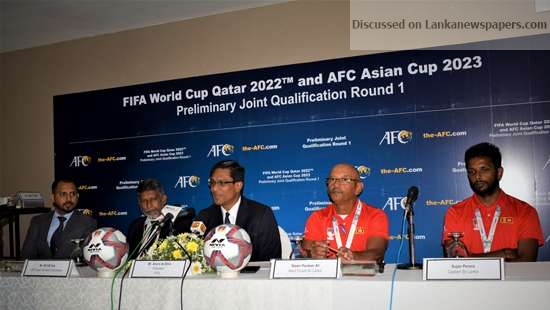 The Football Federation of Sri Lanka (FFSL) is awaiting the final verdict from the AFC for their FIFA World Cup Qualifier second-leg between Sri Lanka and Macau scheduled for tomorrow (11) at the Sugathadasa Stadium in Colombo.
Macau had informed the FFSL that they will not send a team to Sri Lanka citing security fears following the deadly Easter Sunday suicide attacks in Colombo.
However, Anuna de Silva, President of the FFSL emphasised that all arrangements have been finalised for this game and the venue has been endorsed by the AFC Match Officials.
He made these observations during a media briefing held at the Hotel Galadari in Colombo today.
FFSL President also said that the AFC Match Officials are set to meet this morning and a final decision will be taken after consultation with the Macau football authorities.
He also noted that the Sri Lanka Team is determined to put up a good performance in the second-leg after having conceded the first-leg by a solitary goal in China on June 6.
“It is paramount important for any national team to play on their home soil in front of home fans and specially in FIFA Qualifiers which falls only in every four years.”
“We have fulfilled all security requirements and the AFC and FIFA has accepted our security plans to play this game,” de Silva added.
If Macau fails to report to the game the match will be awarded to Sri Lanka according to the regulations.