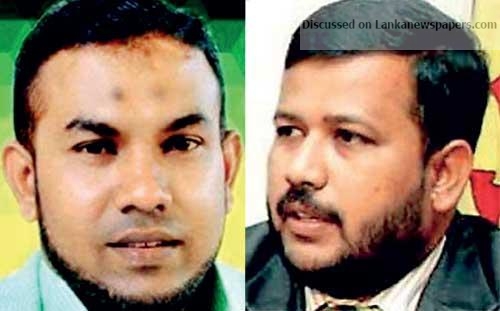 Media, both mainstream and social, and certain politicians have completely diverted the attention of the country and the authorities from the terrorism that wreaked havoc on Easter Sunday on April 21. The whole country is now chasing a perceived enemy totally forgetting the real enemy.
The real enemy is the remnants, if any, of the members of the National Thawheed Jama’ath (NTJ) with the indoctrination of hate against other religious communities and the other Muslims who are not prepared to toe their line. The real enemy that might be waiting to cause another disaster is the ideology that drove NTJ leader Zahran Hashim and his cohorts to cold-bloodedly kill hundreds of men women and children.
They may not necessarily be in a Burqa or Niqab, not necessarily have studied in a Madrasa, the traditional Islamic religious school, not necessarily have studied the Arabic language.
Being fundamentalists, they may not be concerned about the Muslim Personal Law in Sri Lanka either.
However, those who are said to be against terrorism are hunting down not only Burqa or Niqab clad women, but also those covering only their heads. They want to eliminate Madrasas, Arabic language and the Muslim Personal Law.
They say that they were against extremist Muslims and not the traditional Muslims. But they demonize the entire Muslim community; vilify their religion, their scriptures and their practices. When arson attacks were launched in Gampaha and Kurunegala Districts on May 12 and 13, the attackers did not selectively target the houses and properties of the terrorists. It was not clear as to whether any terrorist or extremist was affected.
They want the ordinary Muslims to dissociate from their religion; their religious education and Arabic language while the real enemy, the extremists in disguise and their ideology are at large.
Army Commander Lieutenant General Mahesh Senanayake said in an interview with the Sunday Lankadeepa that only one weapon belonging to the terrorists was captured so far.
He might be referring to the gun that was recovered at the terrorist hideout in Sainthamaruthu where the last bomb explosions occurred on April 26.
However, the fear psychosis created within the Sinhalese by the media hype over the capture of items such as swords and knives during the search operations conducted by the security forces following the April 21 terrorist attack has led them to distance themselves from all Muslims.
It also paved the way for the hate- mongers who had been waiting for an opportunity, to set in motion. The fear coupled with hate has created a situation of harassment of Muslims.
On the other hand the fear psychosis created within the Muslim community not by the Christians who were targeted by the terrorists on Easter Sunday, but by the media and the hate-mongers, including politicians led some of them even to go to temples with flower trays.
It was clear that they were not genuine gestures of religious harmony. It was sheer fear. Buddhists too very well knew that these gestures were not genuine.
The entire issue has now been politicized. Opposition politicians seem to want to keep the tempo on, apparently till the Presidential election is announced in October. They even preferred first the students not to attend school. They spread rumours about a possible second terrorist attack on May 13.
Schools had been deserted while surprisingly the tuition classes were overflowing. Media aligned to the Opposition highlighted the deserted schools, while the State media was quoting the Army Commander as giving assurances on the security situation.
Now, they have found two more issues to keep the tempo on, the issues concerning Industry and Commerce Minister Rishad Bathiudeen and a Gynaecologist at the Kurunegala General Hospital, Dr Mohamed Shafi.
The allegations against them are sensitive and very serious in nature. But the media are divided on political party lines when handling those issues.
The issue concerning the gynaecologist would take a long time to be resolved as each complainant against him has to undergo medical tests. The number of complaints would decide the duration of the outcome of the investigations, apart from other procedural factors.
He might also have to face a tougher time due to the political divisions among his medical fraternity.
Minister Bathiudeen is accused of supporting terrorists who were responsible for the Easter Sunday suicide attacks on churches and five-star hotels where more than 250 people were killed and more than 400 were injured.

Despite the seriousness of the allegations, hilariously it is the politicians and the media who are not experts on security matters that have undertaken the investigations and even the trial, without submitting the evidence they have to the CID.
The Opposition has handed over a no-confidence motion against Minister Bathiudeen while the Speaker has appointed a Parliamentary Select Committee (PSC) to look into the allegations. In both cases, it is the members of Parliament who are going to investigate the matter.
And interestingly, in both cases, it would be a numbers game where the arguments are presented on political party lines or on ethnic lines and not on the merits of the findings of investigations carried out by the police so far. Hence, the outcome of both the NCM and the PSC could apparently be foretold.
Ultimately, the numbers game might clear him of all charges or he would at most be forced to resign from the ministerial portfolio if the NCM against him wins or the PSC finds him guilty of charges. He might be portrayed as a terrorist, but would not be put behind bars. This is not in any way a counter-terrorism measure.
This is playing politics with terrorism. The selective bombardment by the pro-Opposition media in the meantime would help the Opposition to capitalize on the issue and keep the tempo on. Also, the present tension among the people that might be heightened by the media frenzy over the NCM and the PSC might invite another anti-Muslim backlash.
Whatever the outcome of the NCM and the PSC might be, ultimately Bathiudeen would be rewarded politically by this NCM and the PSC. He might emerge as a hero among Muslims at the forthcoming Presidential and Parliamentary elections. Muslims, in spite of their rage against the terrorists who turned their lives hellish, seem to take the allegations against Minister Bathiudeen as a vengeance by the Opposition.
They are of the opinion that the Opposition is after Bathiudeen for not falling in line when they were hard-pressed in finding the majority in Parliament after former President Mahinda Rajapaksa was appointed Prime Minister on October 26 last year. He became easy prey, they view. They also feel this as an exercise by the Opposition with a view to tame the minority parties.
The Opposition strategy is clear. They seem to be convinced that the minority votes that had tilted en-masse towards the UNP at the last Presidential and Parliamentary elections have not changed and that they can ride purely on the Sinhalese votes.
Now, they seem to play the patriotic card in order to further make inroads into the Sinhalese vote bank of the UNP.