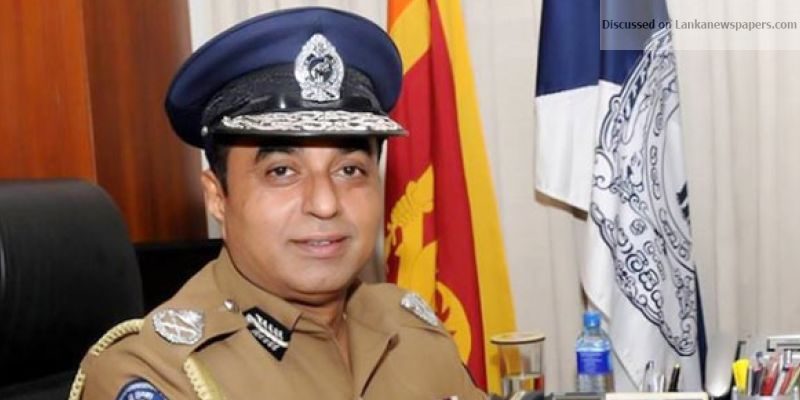 Inspector General of Police Pujith Jayasundara yesterday filed a Fundamental Right petition in the Supreme Court seeking an interim order suspending President’s decision to send him on compulsory leave following the Easter Sunday bomb attacks.
He further sought an interim order to suspend the appointment and confirmation by the President Senior DIG C.D. Wickremaratne as Acting Inspector General of Police.
In his petition, IGP Jayasundara cited Senior Deputy Inspector General of Police C. D. Wickremaratne Constitutional Council Chairman Karu Jayasuriya, Constitutional Council members Prime Minister Ranil Wickremesinghe, Opposition Leader Mahinda Rajapaksa, Justice Minister Thalatha Atukorala, R. Sampanthan, Javed Yusuf, N. Selvakkumaran, Mahinda Samarasinghe, Bimal Ratnayake, Dr. Jayantha Dhanapala, State Intelligence Services Director DIG Nilantha Jayawardena, Chief of National Intelligence Sisira Mendis, former Defence Secretary Hemasiri Fernando and Attorney General as respondents.
Filing this petition through counsel Dinesh Vidanapathirana, the IGP stated that he was excluded by President from attending National Security Council (NSC) meetings from early October 2018 until after the Easter Sunday attacks of April 21,2019.
The IGP said he despite being the Inspector General of Police, was excluded from attending NSC meetings, since October 2018.
He further said the President required Nilantha Jayawardena, Senior Deputy Inspector General of Police as Director, State Intelligence Services (SIS) to report directly to him.
He further said he was only made privy to whatever information was sent to him from time to time, and was denied the ability to have full recourse to or participate in vital consideration of matters of national security.
He said it is in this context, that he did all he could on the basis of limited information given to him, subject to constraints imposed on him.
The petitioner states that on or about April 9, 2019 at 10.00 am, he attended a meeting at the Defence Ministry chaired by former Defence Secretary Hemasiri Fernando, at which meeting Director SIS referred to information of a threat of an attack by extremist Islamist elements. However, Director SIS DIG Nilantha Jayawardena did not emphasise the urgency and seriousness of the matter.
The petitioner states that on or about the same date, April 9 2019, the petitioner received a letter from Chief of National Intelligence Sisira Mendis, which enclosed certain contents of a letter by the Director, State Intelligence Service as an annexure thereto containing information regarding a planned attack by Zahran Hashim and associates.
The said letter informed the petitioner that “secret inquiries” are being conducted into the information received. Another letter sent by SIS had concluded “it is important to alert the law enforcement agencies to be vigilant concerning the information.”
The petitioner said neither first letter nor the second letter contained any indication of the urgency of the situation, nor did they contain a classification to indicate the urgency or priority level, whereas the usual practice is to mark relevant letters “Top Priority” or “Top Urgent”.
The petitioner said, in the circumstances, he decided to forward the letter by the CNI to four senior police officers as it was apparent that without doing so, no meaningful measures could be taken to enable due vigilance.
The Petitioner states that in addition to informing the aforesaid four officers, he also informed all nine Senior DIG’s in charge of the Nine Provinces of the said information regarding possible attacks over the telephone on April 9 evening and April 10 morning, while discussing the Daily Situation Report.
The IGP said he received three letters on April 18,2019, April 19, 2019 and April 20, 2019 all relating to the National Thowheed Jamaath, Zahran Hashim and matters incidental to the same. The said three letters did not request any advice or action from the Petitioner and were shared with the Petitioner only for his information.The said letters expressly stated that the State Intelligence Service was carrying on further investigations.
The petitioner states that at all times Director SIS DIG Nilantha Jayawardena reported directly to the President of the Republic on all intelligence related matters and DIG Nilantha Jayawardena did not report to the petitioner on any intelligence matters whatsoever, other than to keep the petitioner informed of certain matters as he and the President thought fit.
The petitioner states that with respect to the information provided to him regarding the terrorist attack in April, he was unaware of whether the matter had been discussed at the National Security Council and what actions had been taken pursuant to such discussion, if any.
The petitioner states that the lack of information provided to him resulted in the petitioner being unable to take further steps in terms of the law.
The Petitioner states that at or around 8.50 am on Easter Sunday (April 21, 2019), he received the first information of the bombings.
The Petitioner states that on hearing of same, by around 9:00am, he arrived at the St. Anthony’s Kochchikade Church, which had been subjected to bombing.