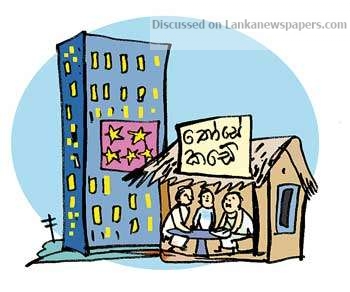 A politico hailing from Digamadulla had provided ample funds to a select group of supporters in the district to participate in a certain event in the city.

A set of hoi polloi from ‘… Kandiya’ had been among these supporters ‘invited’ to the event in the city.
Once in the city, come the lunchtime, this ‘Kandiya’ set had gone to a high-end hotel in the city recommended by the politico. Before entering the hotel, someone had raised the question of whether there was anyone among them who could guide the rest to the servery inside the hotel and order the food. And that question had stumped them all for none of them had a previous experience of having gone inside a five star- hotel!
Meanwhile, a more practical-minded member of the group had said: “Why don’t we go to a ‘thosa- kade’ instead of going to this hotel and making a blunder!”   “Yes! Yes!” another endorsed the idea. “We can have a good feed and save some money to share with!”   So, the group happily went to a thosa- kade in the city and enjoyed a good lunch, they say.