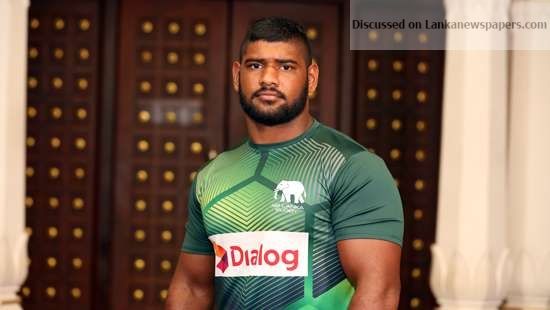 Sri Lanka’s youngest fifteen-a-side captain Omalka Gunarathne is confident of what appears to be a very young side ahead of their Asia Championship campaign which gets underway in Chinese Taipei later this month.
Nearly half of the 26-man Sri Lanka squad is set to make their international debut for Sri Lanka during this tour with senior men like Dhanushka Ranjan, Shehan Pathirana and Richard Dharmapala all unavailable for the tour. Omalka believes that their experience will be missed but is confident of the players he has in the squad.
“Obviously we are going to miss their experience, but I think the tour to Malaysia really helped us. Some of the players in the squad had never played against foreign players before, but they got an opportunity in Malaysian tour and now they have some experience which is a very good sign. So as I said before, we would miss some of the senior players but I am confident that the younger players are capable of filling their shoes,” the number eight told Daily Mirror during a conference in Maharaja Palace on Thursday.
Meanwhile, Sri Lanka head coach Matt Lee believes that the selectors have picked a good squad.
“I am happy with the team that I have been given. The selectors and the coaching staff had discussions and this is the best available team. I think our strength would be our forwards and I think they did exceptionally in Malaysia. They did well in set pieces both scrums and line-outs. The backs I thought were a bit flat against Malaysia, but Fazil is working hard with them and I am sure they will play well in Chinese Taipei,” Lee told Daily Mirror.
Sri Lanka will take on Philippines in their first match which is scheduled to be played on May 29 and they need to win that game in order to qualify for the final which will be played on June