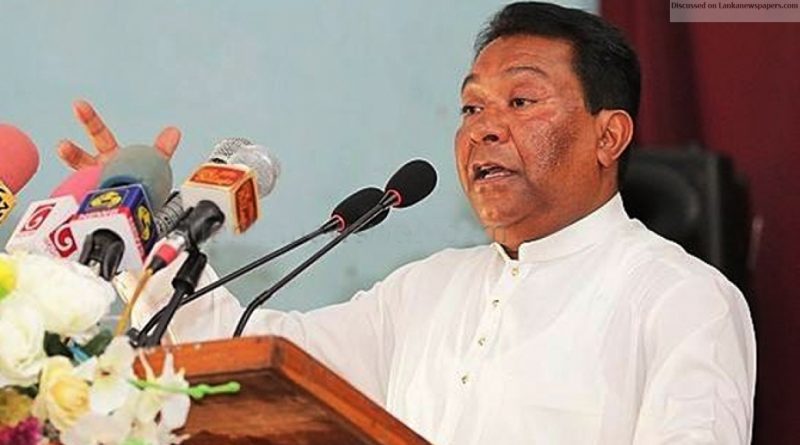 Former Minister and joint opposition stalwart S.B.Dissanayaka continuing his verbal battle with Commerce and Industries Minister Rishad Bathiudeen yesterday said the government had ample evidence to arrest minister Bathiudeeen and a team of joint opposition members including him would urge President Maithripala Sirisena to direct law enforcement authorities to arrest him immediately.
“We have information to prove that he has had close contacts with members of the National Thawheed Jamaath (NTJ) and also that he has helped them in their destructive operations. Therefore, we would make a representation to request President Sirisena as the Minister of Defence and Law and Order to take steps arrest Minister Bathiudeen,” Mr. Dissanayaka said.
Mr. Dissanayaka pointed out that the US conspiracies against Middle Eastern countries like Syria, Iraq and Libya followed with the regime change has inspired the rise of Muslim fundamentalism entities like IS that ultimately resulted Sri Lanka becoming a target for vengeance.
He added that the ‘Arab Spring’ instigated by the US intelligence services in the Middle Eastern countries had now transformed into a vicious beast that bites each and every one found as soft targets.
Addressing the media at the Center for Transformation’ in Colombo, Mr. Dissanayaka went onto say that it was sad to witness that the country has not returned to normalcy even after more than two weeks since the Easter Sunday carnage as the government has failed to convince the public that the country is safe and trouble free.
“The only relief is that the President, religious prelates belonging to all faiths led by Arch Bishop of Colombo Malcolm Cardinal Ranjith, armed forces, the STF, CID, TID the Police and Civil Defense Department have done their utmost to bring peace to the country,” he said.
Mr. Dissanayaka said not only the NTJ and Jamathei Millathu Ibraheem (JMI) but all other Muslim entities that are affiliated to ‘Jamaath’ have to be banned together with Madrasas and Muslim religious schools. The Eastern Muslim University College must be taken over under the University Grants Commission (UGC), he noted.
Responding to journalist, Mr. Dissanayaka admitted that Minister Bathiudeen cut his teeth in politics with the SLFP and had been a member of the Central Committee.
“He was like a kitten at that time doing no harm to any one. But it is the duty of the authorities to open an inquiry to reveal his wealth,” Mr. Dissanayaka stressed.
Former Deputy Speaker Thilanga Sumathipala said the SLFP and the SLPP decided yesterday that each and every citizen should be given security to his or her satisfaction if the country is to return to normalcy.
Mr. Sumathipala pointed out that the country has not returned to normalcy and that is why students do not attend to school and public servants don’t come to the office.