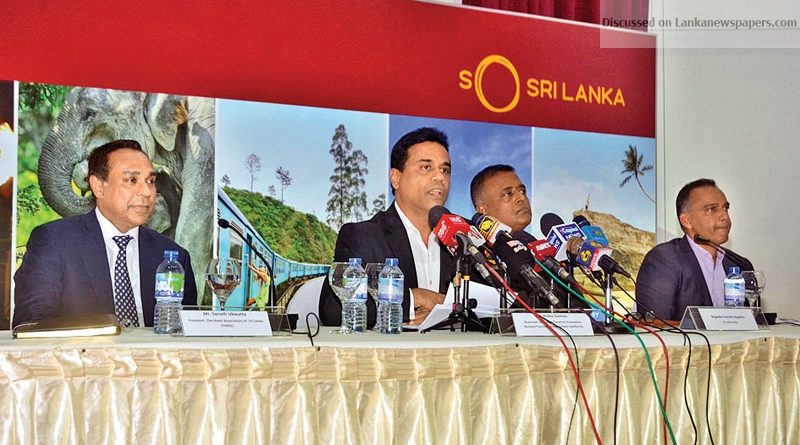 Business
May 7, 2019 Lankanewspapers 0 Comments
Sri Lankan tourism will bounce back to its growth momentum in less than 13 months if there are no more attacks, said Chairman, Sri Lanka Tourism Promotions Bureau (SLTPB) Kishu Gomes.
Speaking at a special press conference held for the industry and media, he said that whenever a terrorist attack takes place, that country has taken an average 13 months to recover. “In Sri Lanka, we hope this would be even sooner.”
Though there is a drop in arrivals, still around 1,700 tourists visit Sri Lanka per day (FIT’s) as against the 4,600 daily arrivals prior to the Easter Sunday attacks. “The industry achieved US$ 4.5 billion revenue target and 2.3 million arrivals in 2018 and we would end 2019, with around 30% less in arrivals and around US$ 3 billion in revenue,” he predicted.
Easter Sunday blasts left 42 foreigners dead and 37 injured, which had resulted in 37 global travel advisories against Sri Lanka in various forms. “Though the travel agents are keen to send tourists to Sri Lanka, these advisories are holding them back and we would soon contact local missions on this subject.”
He said that all planned MICE events in Sri Lanka for 2019, would be held this year, while Sri Lanka Tourism would participate in 25 travel shows and 18 road shows globally.

While Sri Lanka would study the success stories of other countries that suffered similar attacks, a sizable amount would be invested to hire a global PR agency to rebuild Sri Lanka’s brand image.
President, Tourist Hotels Association of Sri Lanka (THASL) Sanath Ukwatte, said that they have requested several concessions including short term tax releases from the government and said that the industry’s future (as well as 500,000 employees) would depend on it. He also requested for duty waivers to import security equipment for Tourist Board registered hotels.
There would be some employees seeking overseas employment since they would receive fewer service charges due to the less number of tourists.
Sri Lanka Inbound Tour Operators (SLITO) President, Harith Perera, said that due to the LTTE war stigma, whenever a similar incident occurs, tourists get upset due to past memories. “Earlier (LTTE war) travel advisories were around the North East, but this time, they are against travel throughout Sri Lanka and good PR campaigns are needed to overcome this.” Perera also reminded that ISIS had carried out 139 attacks in the USA, Canada, Paris, Germany, London, Indonesia, Thailand and Egypt, killing 6,400 and these countries had bounced back. “I am certain that no more incidents would take place in Sri Lanka too, where we could recover in less than one year.”
Sri Lanka Government must also invest much more in defense infrastructure to ensure more security.”