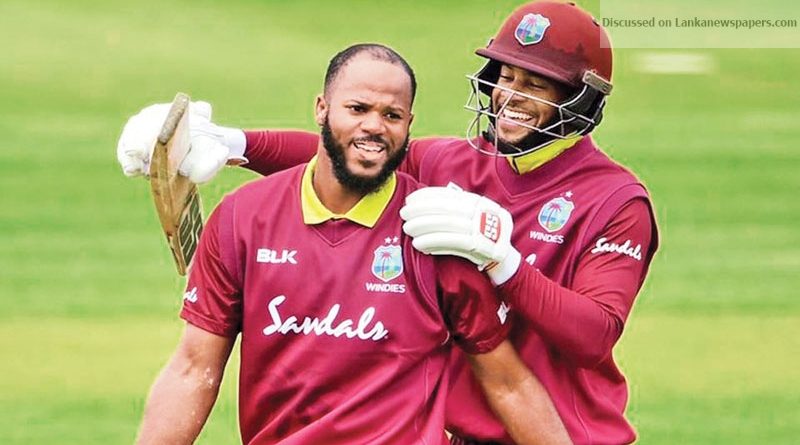 Sports
May 6, 2019 Lankanewspapers 0 Comments
DUBLIN, Sunday – John Campbell and Shai Hope created history during the ODI encounter between West Indies and Ireland in Dublin as the Windies duo added a record 365 runs for the opening wicket.
It was also the first time in ODI format of the game that both openers have reached 150-mark in the partnership.

They surpassed the previous record of 304 runs created by Imam-ul-Haq and Fakhar Zaman in 2018. They achieved the feat for Pakistan during their match against Zimbabwe in Bulawayo breaking the long-existing 12-year record of 286 by Sri Lankan pair Upul Tharanga and Sanath Jayasuriya against England at Leeds in 2006.
The partnership came to an end in the 47th over as Campbell was dismissed for 179 and Hope followed him to the pavilion two overs later as he fell victim to Barry McCarthy for 170.
They came within seven runs of the biggest ODI partnership for any wicket – a record held by another West Indies pair, Chris Gayle and Marlon Samuels. They came within 17 balls of becoming the first opening pair to bat through the entire first innings of an ODI.
Today’s partnership didn’t even come from West Indies’ first-choice opening pair. Campbell, who clattered six sixes in a 137-ball 179, isn’t in the preliminary World Cup squad, and Hope, who stroked a cultured 170 off 152, doesn’t usually open the batting.
Both, though, were too good for Ireland’s modest attack. They were watchful early on, but once they had seen off the initial new-ball nibble – Tim Murtagh and Mark Adair went past the edge on a fair few occasions, with Campbell in particular taking time to get his feet moving – they pretty much did as they pleased.
West Indies ended up posting a mammoth total of 381/3 in 50 overs.
****
LEADING FIRST WICKET PARTNERSHIPS IN ODIs
365 – J Campbell/S Hope, West Indies v Ireland, Dublin, 2019