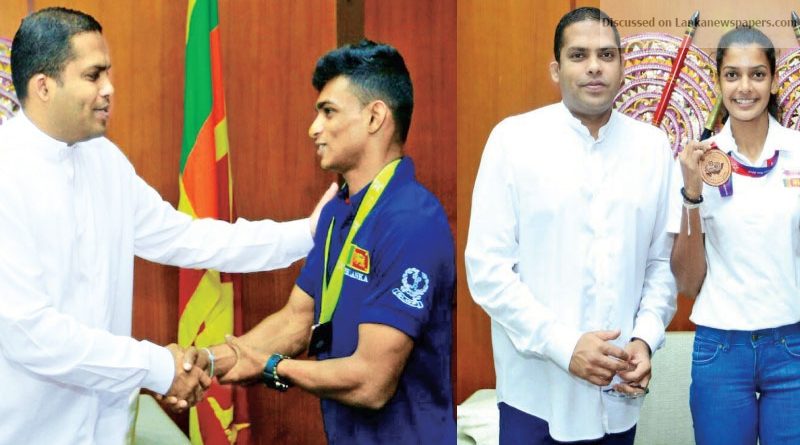 Sports
May 3, 2019 Lankanewspapers 0 Comments
Harin Fernando, Minister of Telecommunications, Foreign Employment and Sports revealed yesterday that three police personnel including the Assistant Superintendent of Police will be sent along with the Sri Lanka cricket team that leaves for England for the World Cup on May 7.
The Minister making these remarks at a special press conference held at the Ministry of Sports yesterday said this decision was taken in order to provide security to the cricketers who are leaving well ahead of the World Cup due to the present situation in the country that has prevented them from holding their scheduled practice sessions.
The two police officers and ASP will fly with the cricketers and while in England they will co-ordinate with British security officials for which the host country has given consent.
The Minister said the delay in the audit report of Sri Lanka Cricket was due to the former auditor general retiring. He said a new auditor general was appointed and that the report will be ready by Monday. Soon after he receives the report he will submit it to parliament and after that it would become a public document.
Speaking further the Minister stated that all future national pool athletes will come under the Sri Lanka Army.

“We are planning to accommodate athletes of the national pool with the Sri Lanka Army to get more training ahead of a big international event.
“We spoke with the Commander of the Army and he also agreed with our plans. The finally selected pool members will be given more training at the Army camps. They will be provided with food, accommodation and given leadership training during the time. The Ministry will looking after all the funds during the training,” the Minister said.
“Sports is the only way to build peace and harmony amongst all ethnic groups in Sri Lanka and we will ensure to achieve it,” he said.
The Minister also met triple jumper Vidusha Lakshani who won the bronze medal at the recently concluded Asian Athletic Championship in Qatar and Sri Lanka Weightlifter Lance Corporal Y.D.I Kumara who won a bronze medal in Weightlifting (55 kg class) at the Asian Weightlifting championship held in China.