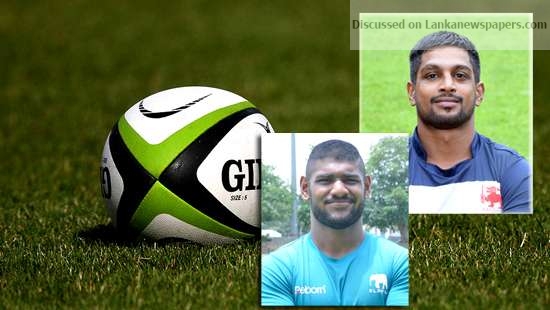 CR and FC number eight Omalka Gunarathne is set to lead Sri Lanka in the two friendly games against Malaysia later this week in a shocking turn of events within the last 24 hours.
Kandy Sports Club scrum half Roshan Weeraratne was set to lead the fifteen-a-side squad to Malaysia and possibly to the Asia Championship next month but the half back on Sunday had informed the selectors that he would be unavailable for the tour due to a personal reason.
However, the ‘Daily Mirror’ is in possession of a leaked Sri Lanka Rugby (SLR) document which reveals that the former Kingswood College Captain has been very unhappy with the selections which has played a huge role in him opting out of the tour.
According to the contents of the document, Weeraratne has spoken to several members of the coaching staff expressing his frustration at the selection of CH and FC hooker Prasath Madushanka to whom he has referred as ‘CH Thadiya’ while also questioning the decision to pick CR and FC’s Rahul de Silva ahead of Air Force SC scrum half Nuwan Perera.
However, the selectors who had been disappointed by Weeraratne’s ‘attitude’ and ‘attendance for training’ have positively responded to his request of withdrawing himself from the National Team, but the selectors appear to have deemed his withdrawal to be a form of protest against selections.
The selectors had named two vice-captains originally for this tour; Kavindu Perera and Omalka Gunarathne who were the captain and vice captain of CR and FC respectively in the recently concluded Inter-Club season.
After Weeraratne’s withdrawal, the selectors had decided to name Omalka Gunarathne as the captain of the National Team yesterday, but hours after this decision was made; Weeraratne has informed the selectors that he is once again available for the Malaysian tour which has angered the selectors who have not considered him for the two friendly games at least.
“There can be very special players with very special talents, but when you play for a team you must understand that that you are all one unit. We don’t encourage players who could damage the team’s unity and there is nowhere in the world that a captain could challenge team selections. For us the priority is the National Team, and not individuals,” an official from SLR told the ‘Daily Mirror’ yesterday.
Meanwhile, the SLR appears to feel let down by some of the best Kandy SC players who had made themselves unavailable for this tour.
“There are some players who are not willing to represent their country in all competitions. Some players would give excuses to avoid some of the matches while making themselves available for more attractive tours which is a big disappointment because as a National player representing your country must be the priority,” the SLR official added further.
Daily Mirror understands that the National Selectors are ready to not consider a total of 10 Kandy SC players for future tours after they had given ‘various excuses’ to avoid the Malaysian friendly matches.
Nuwan Perera who had previously been named as a standby will replace Weeraratne in the squad.
However, Roshan Weeraratne denied any form of protest against selections while claiming he had a genuine reason to withdraw from the squad.
“I want to make it clear that I never had any problem with the selections and I have not spoken negatively about any of my teammates in the National Team. It is true that I sent an e-mail to SLR requesting to withdraw from the National Team because my wife was ill and as you would understand the family is a very important part of our lives. However, by Monday afternoon everything was sorted out by the medical staff and I was quick to inform SLR that I am available again,” Weeraratne told the ‘Daily Mirror’ yesterday.