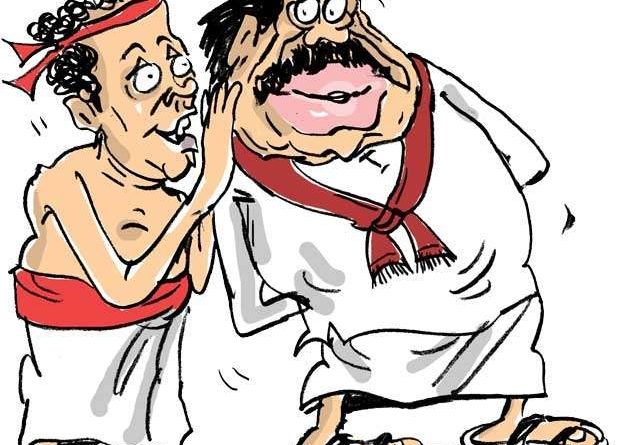 A Diyawanna politico from Matale who was keen on clinching the political marriage between the Blue party and Pohottuwa had hit upon a plan to win over the former strongman’s consent for it.
He contacted a provincial council member from the South who has made a name as an astrologer as well. He is also well known for foretelling the future by going into a trance. He told the astrologer: “The Blue party-Pohottuwa union will become a reality soon if the former Lokka gives his okay. So, if I bring the Lokka to your Devale, can you please go into a trance and foretell that Pohottuwa is sure to suffer a bad defeat if it goes solo at the coming polls, and if it is to clinch a decisive win, it should team up with the Blues.”
The astrologer readily agreed to carry out the plan and not to breathe a word about to anyone.
However, the astrologer had wittingly or unwittingly spilled the beans.  Finally, the story reached the Lokka’s ears too.
The former strongman now wise to the Matale politico’s plan to take him for a ride, decided to give the man a taste of his own medicine. So, one day he got into a chat with the Matale politico and casually mentioned that he had occasion to speak to the Galle astrologer.
“Ah! What did he tell you, Sir,” the Matale man asked suppressing his excitement.
“He warned me that we would suffer a bad defeat if we go to polls in alliance with the Blues and advised me not to have any truck with the them if we were keen on winning the polls,”
The Matale politico was too stunned for a moment to speak.
The former strongman added: “I understand as you often tell me, that this Galle man’s predictions are accurate and never go wrong!”
The shock the Matale man got was so overwhelming he could hardly cover up his confusion. “Oh! Did the man say so!” he had stammered.
Watching the Matale politico looking perplexed, the former strongman burst out laughing, they say.