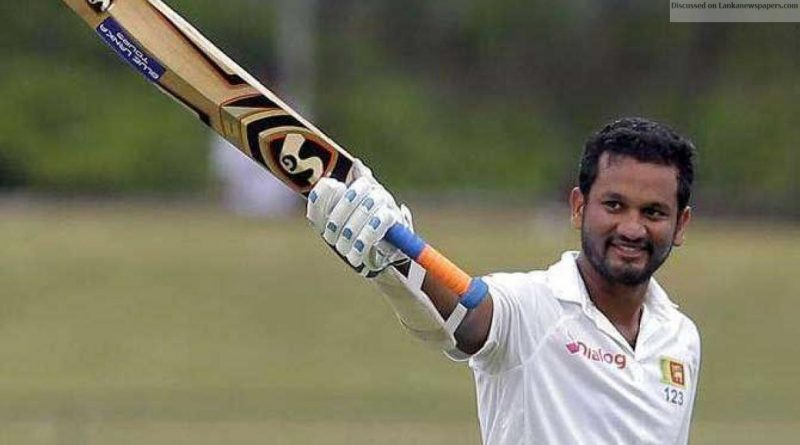 Test skipper Dimuth Karunaratne has been appointed Sri Lanka’s ODI captain and will lead the team during their campaign in the Men’s Cricket World Cup 2019.
The opener last played an ODI in the last edition of the tournament, and has only played 17 ODIs so far in his career. He averages 15.83 with a high score of 60. His overall List A numbers are creditable, with an average 34.34 from 120 games, including six centuries.
Karunaratne was never in the frame for the World Cup but his exceptional leadership during Sri Lanka’s historic triumph in South Africa and the ODI team’s disastrous performance under Lasith Malinga forced selectors to look at him closely.
Former captain Angelo Mathews was the first choice captain of the selectors as Sri Lanka look to turn around its fortunes, but the former skipper has refused to take on any responsibility while Head Coach Chandika Hathurusingha remains in that position.
Mathews was publicly ridiculed by Hathurusingha after Sri Lanka made a first round exit from the Asia Cup last year and assigned the whole blame for the debacle.
Karunaratne’s appointment was a substantial blow to Lasith Malinga who led Sri Lanka in New Zealand and in South Africa. He is reportedly considering retirement from international cricket following his axing as skipper.
“He is not a bad leader to be honest. We have no problem with his leadership,” said Chief Selector Asantha de Mel following Karunaratne’s appointment. “But we need to understand the ground reality.  He doesn’t have the support of the coach and the players. Right now, what we need is someone who can get these players together. Otherwise, it would be disastrous for us.”
The selectors had intimated their decision to Malinga this morning.
“We explained to him the circumstances which forced us to make this decision. He is yet to make his decision known to us,” he explained. Malinga is in the 15-man squad and  if he quits, the selectors have time till May 2 to make a replacement.
Sri Lanka’s ODI captaincy has exchanged hands frequently in recent months. Their last four series have seen them cycle through three different skippers, with all of Angelo Mathews, Chandimal, and Lasith Malinga having been at the helm at some point.
Sri Lanka will leave on May 7 to England for a one-week camp before heading to Scotland to play two ODIs. Sri Lanka’s opening World Cup match is against New Zealand on June 1, 2019.
Read also: How Karunaratne change the DNA of the Test team: http://www.dailymirror.lk/top-story-02/How-Karunaratne-changed-the-DNA-of-Sri-Lanka-team/317-163342