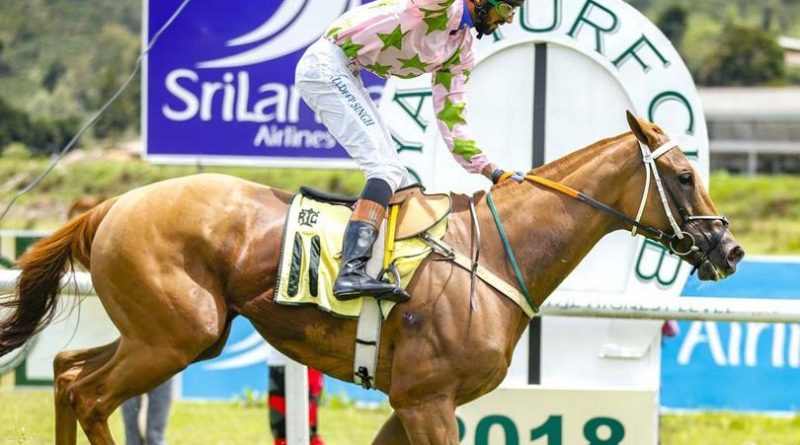 Alcazaba, the 9-year-old seasoned mare, will be eyeing for a rare hat-trick at the RTC Governor’s Cup 2019, which will take place on April 15, post Sinhala and Tamil new year, at the Racecourse in Nuwara Eliya.
Owned by Deepthika Jayakody and Purni Edwards, Alcazaba was rested for the RTC Spring and Summer Raceday Cup held on March 31, on medical advice, and has been included into the lineup of 12 Class 1 thoroughbred horses in the 1600-metre race.
Nicknamed the ‘Queen of Nuwara Eliya’, Alcazaba, together with Indian jockey Irvan Singh and trainer S.D. Mahesh, has remained unbeaten over the past few seasons.
Joining from the same stable will be Silver Streak ridden by S.D. Janaka, but the real threat will be Spirited Touch, owned by Fearless Stables and ridden by jockey Aneel with S.V. Mathialagan as the trainer.
The stable will unleash their second challenger Chul Bul Panday but Parushram owned by David Anthony and ridden by Ajeet Kumar could possess a greater threat to the bunch.
Santos, owned by Edwards and ridden by Nikhil Parmar, claimed a thriller after a photo-finish on March 31 against Baashagar, owned by Mr. and Mrs. Gamini Jayaratne, has the possibility of creating an upset.
Baashagar too would be eager to finish off this important race in style as redemption to what it missed a fortnight ago.
Albertino, ridden by R.P. Shinde is the second challenger to represent the Jayaratne Stables, as Another Ace, owed by Manishraj Sethi, Hasanga Jayaratne and Ranbir Singh and ridden by A. Ajinkya, has gained attention like never before from other contenders.
Areca Wonder, owned by David Anthony and ridden by S. Suganthan, has had a good record in the recent past as Brilliant Cut, owned by Ajantha de Soyza and ridden by Mohan Raj and Carlton, owned by Anita Dorai and K. Sanjeewan.
The 12 runners will cover eight furlongs with intentions of laying the hands on the coveted RTC Governor’s Cup, which is scheduled as the fifth and final race of the exciting day at 1.20 pm.
Prior to the main race, at 12.45 pm, the RTC Queen’s Cup will be run with a fleet of six horses of Class 2, covering a distance of 2000 metres.
The runners lined up for the second most anticipated race of the day include Roswald, Star Scholar, Stormont, Celestial Fire and Star Ace.
The Class 4, 1400-metre race for the Sporting Star Challenge Cup will include five runners, namely, Tuscano, Torpedo, Honourious, Night King and Legal Legacy, while the Mayor’s Cup for Class 3 horses of 1600 metres will be a challenge among six runners where Olive, Glittering, Bouquet, Vigorous, Maracana and Charming Grey are in fray.
The RTC Governor’s Cup Raceday will kick off at 10.45 am with the Class 5 race of 1070 metres for the Emanuel Woehrl Memorial Trophy, where 11 runners are in line. They are Crimson Quest, Zulu Fantasy, Krabi, Scarlet Prince, Waiting for Glory, Miss Ivory, Goldie Girl, Aries, Cosmopolitan, Salsa Dancer and Tender Mist.
In addition to the five exciting races, the Royal Turf Club (RTC) has lined up exciting activities inclusive of entertainment, competitions for spectators and an eventful day for holiday makers who are visiting Nuwara Eliya, during the April season.
Following the raceday, the RTC Magic Million Cup will be held on April 21, where winners are expected to walk away with grand prizes.
The RTC events for the Holiday Season are sponsored by Colombo Hilton, Blackpool Hotel Nuwara Eliya, Alpine Hotel, The Hill Club, Red FM, Mosh and Chereux.