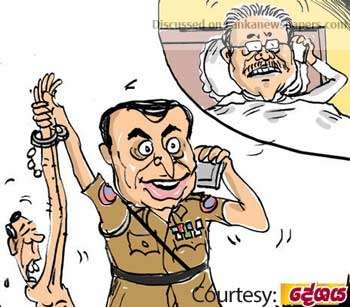 The recent political developments have sent the khaki chief into a flurry of excitement, they say.
His peculiar conduct these days has become a matter for concern for some, while it has become a source of amusement for some others.  Ever since the sudden regime-change, the chief had been giving calls to the former defence bigwig one after another resorting to some excuse or other.
The former defence bigwig had been fast asleep when his cell phone shrilled at predawn the other day. Given the prevailing volatile situation in the country, he hastened to answer the call to find it was from the khaki chief.   “Sir…, I’ve got an important piece of news to convey to you. Hence this call!”   “Ah! Something important. Out with it!” the former bigwig had replied.
“Yes! Sir, A surprise! I thought ‘sir’ should be the first to know it…!”   “Sir…, Sir…, this morning in Wilpattu today…” the khaki chief was stammering.
“Yes! Yes! What happened?”, the former defence bigwig asked. He was now losing his patience.   “Sir…, Sir…, a man had slaughtered a deer in Wilpattu. My men have nabbed both the man and the carcass! We have to put a stop to poaching like this…”
“I say, have you gone mad in the wee hours of this morning? Your deer …Wilpattu…! You broke my night rest for nothing!” He had angrily rung off after rebuking the khaki chief.