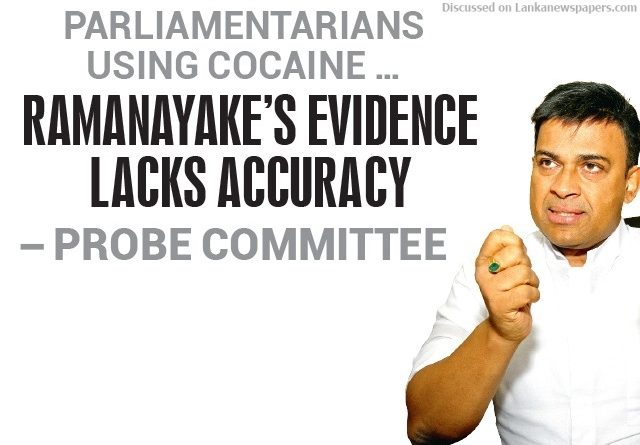 The UNP’s four-member committee, appointed to probe the claims made by State Minister Ranjan Ramanayake, about Parliamentarians who allegedly use cocaine, has reportedly concluded that they could not be satisfied with the accuracy of latter’s testimony given before the committee.

Following the arrest of notorious underworld drug kingpin Makandure Madush in Dubai, Ramanayake made a controversial statement alleging that 24 MPs, including four Cabinet Ministers, use cocaine and other kinds of narcotics.

Ramanayake said that he would reveal the names of alleged cocaine using MPs to the Speaker. However, Speaker Karu Jayasuriya informed the Parliament last week that he had not received a name list as such.
As Ramanayake’s allegations created uproar in the House, the UNP decided to appoint a committee headed by Leader of the House and Minister Lakshman Kiriella. Other members of this committee are State Minister Eran Wickramaratne, MP Professor Ashu Maransighe and Attorney-at-Law Nissanka Nanayakkara.
Ramanayake appeared before this committee and gave a testimony regarding his allegations for over 40 minutes.
After analyzing his statement, the committee had concluded that they could not be satisfied with Ramanayake’s testimony. “Ramanayake in his testimony made some allegations but those were not based on solid evidence. Therefore, the committee has found it difficult to measure the accuracy of those allegations,” political sources said.
Moreover, sources said that the committee has recommended that some facts Ramanayake provided should be directed to the Criminal Investigations Department (CID) to obtain a report as soon as possible.
Meanwhile, speaking to Ceylon Today’s sister paper Mawbima, Ramanayake claimed that there is a female MP among the 24 MPs who allegedly uses cocaine. There are eyewitnesses who saw her taking cocaine, he further claimed.
“The CID has been informed about this female MP. Apart from that there is information that the staff of a Muslim Minister had purchased huge stocks of cocaine. The CID also has been informed about another MP who sits in the front row of the Parliament and speaks about the rights of plantation workers. There is an MP representing the Southern Province and the CID has been informed that this MP uses cocaine as well,” Ramanayake alleged.