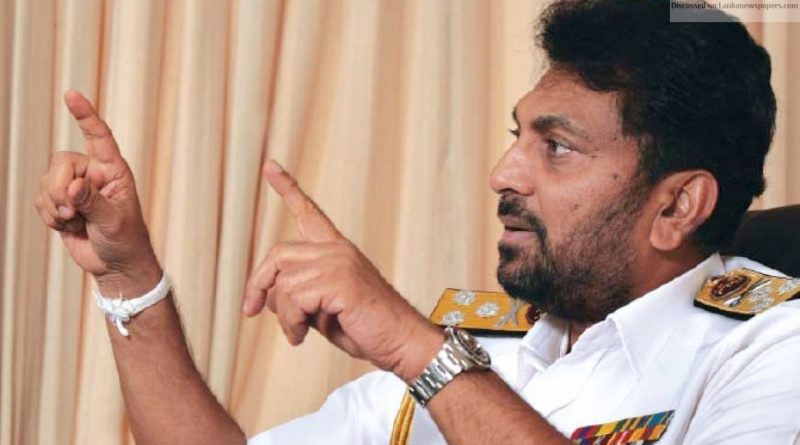 Former Navy Commander Admiral Wasantha Karannagoda today filed a fundamental rights (FR) petition in the Supreme Court (SC) seeking an interim order preventing him from being arrested in connection with the investigations into the abduction and killing of 11 youths in 2008-2009.

He cited OIC Nishantha Silva and Director Shani Abeysekera of the Organised Crimes Investigation Unit as well as DIG CID Ravi Seneviratne, IGP Pujith Jayasundara and the Attorney-General as respondents.

The petition is to be supported for leave to proceed by Romesh de Silva PC with Sugath Caldera instructed by Sanath Wijeyawardane on March 1.

On May 10, 2009, he received notice of an allegation that his security officer Lt. Cdr. Sampath had abducted certain youths and detained them within Navy premises in Trincomalee.

On May 10, the petitioner was advised that Lt. Cdr. Sampath may in fact be guilty of committing the said offence.

On May 28, 2009, Lt. Cdr Sampath’s officer’s cabin was opened by the Naval Provost in the presence of the police and many suspicious materials were found including large amounts of cash, promissory notes and identity documents of other persons. On June 10, 2009, Lt. Cdr. Sampath was arrested whilst absconding Army Headquarters.

He laments that on September 13, 2016, Lt. Cdr. Welagedara of the Sri Lanka Navy provided a false statement to IP Nishantha Silva at the CID, implicating him and several others including Admiral Colombage, Capt. Dasanayake and Cdr. Ranasinghe, stating that these officers had threatened him with death.

On September 27, 2016, IP Nishantha Silva filed a B-report in the Colombo Fort Magistrate’s Court based on Lt. Cdr. Welagedara’s statement.

The petitioner states that he became aware that Rear Admiral Travis Sinniah (as he was then) made a statement to the first respondent, which was reported to court in a B-report dated August 2, 2017.

The said Travis Sinniah was a Deputy Area Commander East (Trincomalee) when the petitioner was Navy Commander.

In the said statement supposed to have been made, Sinniah is said to have claimed that: (a) Illegal detention cells were functioning under the petitioner’s supervision at the Trincomalee Navy camp known as ‘Gunsite’; (b) The petitioner had instructed Travis Sinniah not to supervise or conduct any activities with regard to these cells; (c) The petitioner and several others were aware of the fact that persons were detained at these cells and later killed; and (d) The petitioner is responsible for the killings of detainees held in the said cells.

The petitioner claims that the first respondent and other respondents did not at any stage seek to interview the petitioner or obtain any statement from him with respect to the false allegations said to have been made by Travis Sinniah.

The petitioner pleads that no steps whatever had been taken in respect to the allegations levelled by Lt. Cdr. Welagedara and Admiral Sinniah.

He states that on September 18, 2018, Rear Admiral KJCS (Shemal) Fernando of the Navy had provided a statement to the first respondent that the petitioner had failed to take proper steps in respect to the five youths referred to by Felix Perera. The said Shemal Fernando was the Naval Secretary to the petitioner at the relevant time in 2009.

The petitioner maintains that he did take several steps to cause an investigation to take place and to brief his superiors concerning the allegations of abduction and detention of youths.

The petitioner pleads in the said matter systematically, the respondents and particularly the first respondent had over time attempted to concoct a reason to arrest the petitioner.

The petitioner pleads that all allegations and implications made against him in the said B-reports are false and have been made mala fide with a view to make him a suspect illegally and wrongfully for personal and political reasons and to deprive him of his personal liberty.

The petitioner claims that it is not even alleged that he physically abducted the youths and/or was physically present when they were abducted.

He pleads that no charges/indictments have been framed up to now against any of the persons alleged to have been directly involved in the abduction of the youths and that there is no reason to arrest him and bemoans that he is being victimised for political reasons and as a political vendetta.