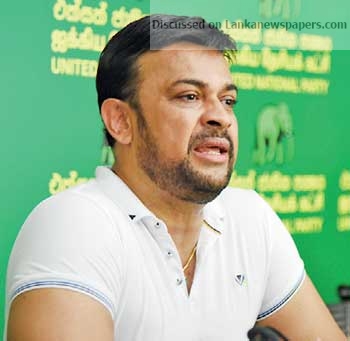 UNP Parliamentarians had reportedly waged ‘war’ against their colleague, State Minister Ranjan Ramanayake, during the UNP Parliamentary group meeting held at the Parliament Complex yesterday (20), over his recent allegation that 24 MPs, including four Cabinet Ministers, were using cocaine and other kinds of illegal narcotics.

This had started when outraged Minister of Sports, Harin Fernando claimed that if Ramanayake was present at the group meeting he would not hesitate to smack Ramanayake in the face.
During the meeting, Ramanayake had reportedly come under severe criticism by Ministers Dr. Rajitha Senaratne, Ravi Karunanayake, Thalatha Atukorale, John Amaratunga, Sagala Ratnayaka and Field Marshal Sarath Fonseka. Apart from them, many MPs including Sidney Jayarathna had blamed Ramanayake for his alleged irresponsible behaviour.
They had demanded the UNP Leadership to launch an investigation into Ramanayake’s allegations and take suitable actions against him.
Meanwhile, during Parliamentary sittings on the same day, Leader of the House and Minister Lakshman Kiriella also said, “Ramanayake has not informed the names to the Speaker, the Premier, the Chairman of the UNP and the Criminal Investigation Department (CID).
This was revealed at yesterday’s (20) Government group meeting. His allegations are serious and action should be taken about it.” He then informed the House that a committee Chaired by him was appointed to inquire into Ramanayake’s allegations.
“State Minister Eran Wickramaratne, MP Professor Ashu Marasinghe and Attorney-at-Law Nissanka Nanayakkara, who is the Legal Secretary of the UNP, are the other members of the committee. We will present our report soon. This is an internal probe from the Party and if necessary the Speaker may conduct a separate investigation”, he added.