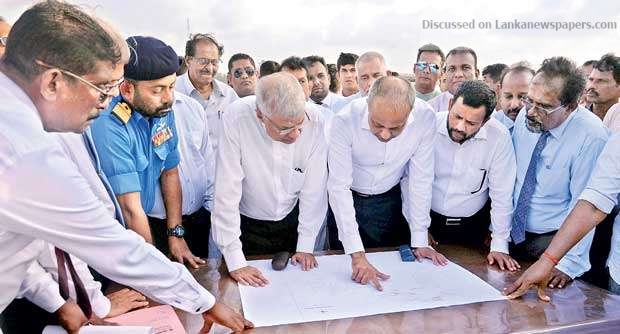 Prime Minister Ranil Wickremesinghe said step would be taken to develop a vibrant economic hub around the Kankesanthurai harbour that would be transformed into a commercial port with Indian assistance.
Wickremesinghe visited the Kankesanthurai area on Thursday to discuss the implementation of the US$ 45.27 million development project for the KKS harbour. The Prime Minister instructed officials to work expeditiously to finalize land acquisition and other preliminary work of the three-year development plan.

Wickremesinghe, in his capacity as the Northern Province Development Minister, has also obtained Cabinet approval for the development work of the Kankesanthurai harbour.
Ports, Shipping and Southern Development Minister Sagala Ratnayaka tweeted that the Kankesanthurai harbour, currently operated by Sri Lanka Navy, would be transformed into a port that can handle general cargo ships.
The transformation of the port is aimed to boost import and export sectors while generating a large number of direct and indirect employment opportunities.
“Under this plan, the harbour’s basin will be deepened to 8 metres allowing it to handle general cargo ships. The current breakwater will be completely replaced as part of the transformation. One existing pier will be completely rehabilitated and a new pier will also be constructed,” Ratnayaka stressed.
The Sri Lanka Ports Authority (SLPA) has already begun initial work on a 15-acre area within the KKS harbour premises, and it is expected to be expanded to a 50-acre area under the next phase.