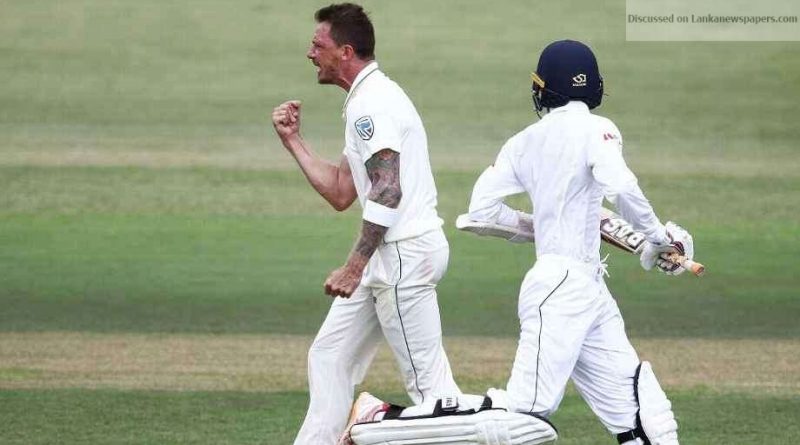 At the start of the second day in Durban, there was a sense of inevitability. Despite a fine show on the opening day, a lot depended on how the Sri Lankan batsmen fared against the power-packed South African bowling line-up. As a familiar script unfolded, the hosts nosed ahead in the contest as Dale Steyn’s four-wicket haul kept Sri Lanka to just 191. Having gained a handy 44-run first innings lead, South Africa ended the day on 126 for 4 – with an overall lead of 170.

Despite posting a modest total, South Africa were always in the game with their pace-heavy bowling attack. The slide for Sri Lanka started very early in the day as six wickets fell in the first session. Steyn started the downfall when he trapped Oshada Fernando in front before Vernon Philander pinned the visitors on the mat. Fernando was unlucky to be adjudged lbw, as replays suggested the ball was missing leg stump. Aleem Dar got the decision wrong and so did Dimuth Karunaratne who convinced his partner not to review the decision.

The Sri Lankan captain was pinged in front in the very next over before Kusal Mendis edged Philander to second slip after striking some promising boundaries during his 24-ball 12. Niroshan Dickwella walked in with his side 76 for 4 but failed to get going before falling to a short ball from Duanne Olivier. If the poor application shown by the top order wasn’t enough, Dhananjaya de Silva’s shot in the last over before lunch was enough to show the fragility of the Sri Lankan batting.

De Silva pulled a short one straight to fine leg with just two balls left in the first session as Sri Lanka slipped to 133 for 6. Suranga Lakmal didn’t last too long but with Kusal Perera attacking from one end, the runs continued to flow. Perera reached an aggressive half-century but fell for a 63-ball 51. Once the top order had been flushed out, the South African pacers bullied the lower-order with a barrage of short balls. Both Lasith Embuldeniya and Kasun Rajitha took blows on the body and on the helmet but offered some stern resistance that could put the top order to shame.

The pair batted for ten overs – to score 32 – and pushed the score past 180 to bring the deficit below 50. Rajitha was eventually run out, after some brisk work from Aiden Markram at short leg, before Kagiso Rabada cleaned up Embuldeniya. Steyn, who last picked up a five-wicket haul against New Zealand in 2016, almost had his 27th five-fer but saw Dean Elgar drop a dolly at gully. Steyn got Rajitha to fend at one and lob a simple catch towards Elgar. The fielder went for an unnecessary dive and eventually grassed the opportunity.

Sri Lanka, however, did well once again with the ball to keep the hosts in check. Markram raced to 28 off 30 before he edged a wide one to slip while Hashim Amla slapped a shortish delivery to gully. Temba Bavuma was trapped in front by Embuldeniya with a straight one to leave South Africa wobbling at 77 for 3. While Faf du Plessis stayed unbeaten on 25; Elgar threw his wicket away as the lead approached 150. Trying to take on Embuldeniya, the opener smashed one back to the bowler who held on to a sharp catch.

A total of 13 wickets fell in the second day as South Africa pushed their lead past 150. Sri Lanka, however, with the four wickets ensured that the hosts were on their toes heading into the third day with the only bowlers to follow.