Diversified conglomerate Hayleys PLC with an asset base of Rs.233 billion, bounced back strongly during the quarter ended December 31, 2018 (3Q18), after recording losses for two consecutive quarters, the interim financial accounts released to the Colombo bourse showed. 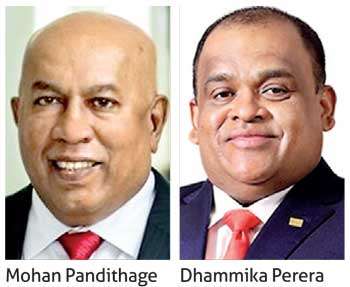 The group earnings for the quarter under review improved to Rs.5.86 a share or Rs.439.4 million, compared to earnings of Rs.2.37 a share or Rs.177.9 million recorded for the same quarter, previous year.
The group revenue for the period rose impressive 20 percent YoY to Rs.59.7 billion, backed mainly by the stellar performance of the consumer and retail business segment, among others.
The operating profit for the quarter under review rose 27 percent YoY to Rs.4.5 billion. The group’s earnings before interest, tax, depreciation and amortization (EBITDA) rose sharp 80 percent YoY to Rs.9 billion.
On November 1, 2018, Martin Bauer Group of Germany joined Hayleys Global Beverages (Pvt.) Ltd as a strategic partner by investing in a 51 percent stake of the company, which in turn resulted in a fair value gain of Rs.272 million.
However, the group’s net finance cost, stemming largely from the recent acquisitions, rose 37 percent YoY to Rs.2.7 billion. For the nine months ended December 31, 2018, the net finance costs stood at whopping Rs.7.7 billion, an increase of 97 percent.
The group balance sheet as at December 31, 2018 carry short-term interest-bearing borrowings to the tune of Rs.48.6 billion, an increase from Rs.43.9 billion a year ago.

The portion of the group’s long-term interest-bearing borrowings stood at Rs.22.5 billion, compared to Rs.11.6 billion a year ago.
Meanwhile, Hayleys reported earnings of Rs.0.46 per share or Rs.34.8 billion for the nine months ended December 31, 2018, compared to earnings of Rs.2.62 a share or Rs.196.6 million recorded for the corresponding period, last year.
The revenue for the nine months rose 45 percent YoY to Rs.162.7 billion.
The operating profit for the period was Rs.11.3 billion, up 68 percent and the EBITDA reached Rs.15.1 billion.
“We are pleased to see such a strong performance across the Hayleys group over the last quarter. Taken together with the cumulative results of the period, our businesses have displayed resilience in the face of significant volatility in the domestic and international economy,” Hayleys Chairman/CEO Mohan Pandithage said in an earnings release.
Due to the consolidation of Singer (Sri Lanka) PLC, the group’s retail sector expanded revenue during the nine months to Rs.52.4 billion, against previous Rs.19.9 billion, while the operating profit rose sharply from Rs.966 million to Rs.3.4 billion.
The group’s transportation and logistics sector posted similarly impressive results, expanding turnover to Rs.33 billion, from Rs.25.8 billion in the previous year. The segment’s operating profit rose from Rs.1.9 billion to Rs.2.2 billion.
The earnings release said during 3Q19, the sector’s distribution centre capacity was increased with completion of new projects, including the Advantis Logistics City, while expanding their global presence.
Meanwhile, a strong performance by the group’s agriculture sector resulted in turnover rising to Rs.10.8 billion for the nine months, from previous Rs.10.1 billion while the operating profit expanded from Rs.736 million to Rs.1.2 billion.
The purification products sector represented by Haycarb PLC posted expanded turnover of Rs.14.3 billion, against a previous Rs.10.9 billion, while the operating profit rose significantly from Rs.701 million to Rs.1 billion.
The group’s hand protection sector represented by Dipped Products PLC recorded a turnover of Rs.12.9 billion, while the operating profit of the sector expanded from Rs.266 million to Rs.622 million.
Another notable performance was seen in the group’s eco-solutions sector, which manufactures and exports value-added coconut fibre products, recorded an increase in turnover from Rs.3.2 billion to Rs.5 billion and went on to make a vital reversal in its bottom line, posting a profit of Rs.302 million, against a loss of Rs.59 million.
As at December 30, 2018, billionaire businessman and Hayleys PLC Co-Chairman Dhammika Perera held 50.44 percent of the company. The Employees’ Provident Fund also had a 5.04 percent stake in the company being the third largest shareholder.