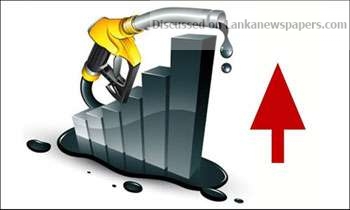 The retail prices of fuel have been increased with effect from midnight today based on the fuel pricing formula, the Finance Ministry said.

Accordingly, the prices of fuel were increased as follows:

The price of diesel should have to been increased by Rs 9.59 in keeping with the latest global market price of crude oil, the Ministry said.

However, the price of Lanka Kerosene will remain at Rs. 70 per litre.

Despite the fuel price revision, the ministry said there would be no increases in transport charges.

Meanwhile, the Finance Ministry said fuel prices were reviewed on the 10th of every month under the fuel pricing mechanism introduced in May 2018.

When the oil prices were upwardly revised last on October 10, the price of a barrel of crude oil had gone up to US Dollar 84. It came down to USD 70 by November 2018 and it was reported to be 53 when the fuel prices were last reduced on January 10, 2019.

When the fuel prices were increased for the first time in May 2018 under the pricing formula the local selling price of Petrol was Rs 137 per liter and by now it has come down to Rs 129 per liter.

The Diesel price which was at Rs 129 per litre in May 2018 has today has come down to Rs 103 a liter. However, unfortunately the bus fare, three wheeler fare and other transport charges were unreasonably increased higher percentage than the fuel price revision.

Under this context, the government stresses that there is no reason for any  fare increase in any of the transport or other logistics sectors on par with this latest fuel price revision.